Iperfungus said:
Hi everyone!
Max from Italy here.
I'm 43 y.o. and I play guitar since more than 30 years.
I owned many instruments and a couple of very serious guitars.

Since 2 days, I'm the proud owner of a 1987 CU24 in Vintage Yellow and I'm walking on clouds while playing this beauty.
Paul actually made an incredible job with these guitars, between 1985 and 1989.

This is more than a serious instrument, where every detail or feature has its role and cannot be modified without changing the whole spirit of the guitar.
The T&B pickups are the best humbuckers I ever heard, no doubt about this.

Happy to join the community and I hope we'll have the chance to share for longtime!

A lovely guitar Max.
A

I'm with you. McCarty-switching is the way to go... I've loved PRS's for some time, but I could never get my head around the rotary-dial labelled from 1 to 10... I've had my 1991 24-Custom re-wired with McCarty-switching and my favourite guitar makes sense now.
B

Hello all my name is brantley
J

Im Jez in the UK. Ive owned a few PRS, but have a CU22 and just bought a CU24 Floyd yesterday

Your Goldtop is lovely as well!!!

long time lurker, soon-to-be first time PRS owner...have a Mark Holcomb edition on order and can't wait to get it and join the club!

Nice to see the daily additions.
Welcome all.

Hi guys- My name is Franco and I am an almost a new PRS owner.. Been reading and reading and reading all the posts about the DGT. Pretty much love the idea of it without ever having picked one up. But thats about to change, just got a beautiful looking Frost Blue 2012 DGT Standard used on Reverb.com. I won't have it until next week sometime, I am at the mercy of the UPS gods and the weather. Practically freaking out, cant wait to get it in my hands. I played a friends all Mahogany PRS body and really like the McCarty pickups he had so I am hoping this DGT will do all that and maybe more. My other guitars right now are a G&L ASAT which I love and I have gone through a whole slew of lesser guitars to get here. I play through a TC Electronic Nova system with a Xotic AC as a my booster. This feeds into a Custom Shop BAD CAT amp. I can go from Mike Campbell to David Gilmour with ease. This is my favorite rig ever, now all I need is the talent to play it better.. Love the wealth of info on this site and look forward to sharing more with you all..

Be sure and start a NGD (new guitar day) thread with pics when you get your DGT!

Have a look at this thread to get started:

Will do! Thanks for the tutorial link..
f

Be sure and start a NGD (new guitar day) thread with pics when you get your DGT!

Have a look at this thread to get started:

I´m not new to the forums, 'cause I shared a few posts in certain threads. But I didn´t introduce myself.

Alright: Let´s start at the end of the eighties... My parents forced me learning an instrument as a six years old boy. Yeah, hard life...
My elder bro played the piano.
And so did I... Easy decision.

But I didn´t enjoyed it very much.

At the age of fourteen we spend our holidays around my fathers relatives. His cousin played a brass instrument in a lokal country band. The drummer was the owner of a guitar and drum shop.
One day my father took me to the shop for a visit.

We left the shop with full hands: a "made in Japan" Les Paul copy, a 20 Watts amp, cable and a guitar book.

A few month later I ended my piano lessons forever...

After two year being autodidact I was taught by a grammar school collegue of my elder brother.

This lasts two years because he left the area for university.

But to that time we visited a local guitar center. This was my first time touching a real PRS.
It was too expensive.

My second guitar is a Rockinger Rudvog, I purchased in 1995. I hat the opportunity buying Rockinger/Duesenberg prototype.

After passing my A levels in 1997 I started my first 12 month leg in military service.

No time for guitars.

Then it was my turn to attend to university. Construction/Civil Engineering...
Before my grandma passed away she donated a few bucks to her grandchildren.

Enough for a second hand PRS...

In my wider circle of friends there was a band leader who played a amber coloured PRS CU24 with birds. Disirable you could imagine.

In 2000 I reenlisted military service for officer career.

For recreation I took my guitars from time to time.

In 2011 my wife suprissed me with a money present. Spending for what?!?

An other MTB (My other long time hobby)? Not necessary.
Youtube is nice. And Dave Weiner. Oh, no, I should mention Steve Vai. I searched a some Crossroads stuff.

And on the side was this Mr. Weiner depicted with a familiar outlined guitar but an unfamiliar amount of pickups.

A few days later decision making process was completed. The web shops of several guitar shops had been checked. And I ordered
a 513. My specs: A quilted 10 Top and the colour Black Gold.

In the meantime three more guitars have been bought. A modified Strat copy from Legend, a 1995 Ibanez RG 570 CTAM, and a custom made guitar (role model PRS NS-15, but made of maple, thinline type, special pickups and a piezo).

My 513 has an other story to tell, but you can find it within this forums, so I won´t tell it twice.

Thanks for your kind attention! Hello all !!!
Been lurking here for a while and decided I'd finally join
Love the forum especially the private stock friday's thread !!
Thought Id share some pics of my Violin II...
(I think the MOP looks like a setting sun amongst a foreground of clouds)...

Hi all. I'm Pinch from Cape Town, South Africa. I have been lurking around the forum for a while and finally decided to become a member. I was looking for a forum where people treated each other with respect no matter the question or the value of gear. I think I have found it I am the proud owner of a 2012 DGT gold top. It was love at first touch, but that is a long story... Once I have set up all thats necessary for sharing pics I will drop some.

Welcome pinch.
Everybody loves a goldtop.

Hello all. Jason here. Originally from Georgia, currently living in California, soon to be living in the commonwealth of Massachusetts ...the joys of military life

I've always been drawn to music and been messing around with various guitars since I was a kid, but never really did more than mess around. I'd pick up a lick here and there but never really managed to learn a whole tune. My wife has often joked about how I know a little piece of many songs, but can't play a whole song from start to finish. Lately I've been playing more though and I have actually been making some progress I'm happy with. I've even got a few tunes down all the way through...I believe they call that a "repertoire"!

So I decided I want a nice electric to go along with my Martin acoustic. I tried a used made in USA Fender Stratocaster but sadly I'm just not crazy about it...I'm forever bumping the selector switch or hitting the volume knob and I have never been happy with the tone. So the Strat had to go.

I tried out an S2 Custom 24 at a LGS and really liked it. The selector switch is in a better location for me, the bridge is a lot more comfortable for palm muting and the volume knob is in just the right spot so I can get to it easily but not bump into accidentally. And the tone! But I really wanted a semi-hollow and unfortunately the only other PRS they had was a core model that was out of my price range.

Soooooo long story short (or maybe not): I Just placed an order for a tri-color sunburst S2 Custom 22 semi-hollow! Should get here by this Friday...just in time to play all weekend! Can't wait!
:beer:

If I've got this figured out there should be some pics of my actual guitar from the retailer's website: 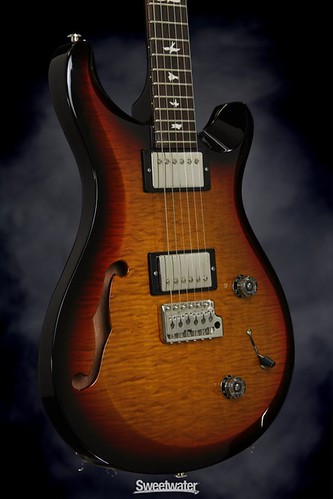 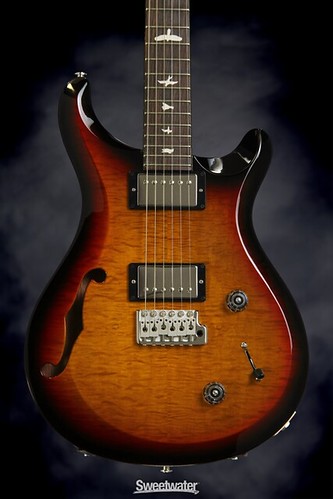 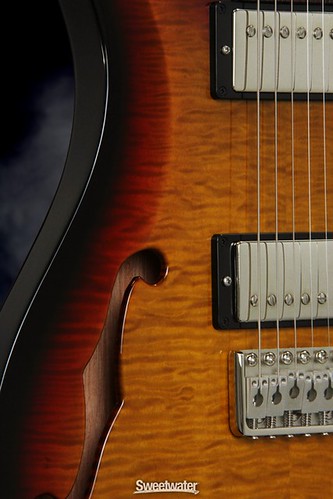 It looks fantastic! Enjoy Massachusetts. I lived there for 10 years, moved away 35 years ago, and still think about going back. In the meantime, rock on.

First time PRS owner. Actually I just waded in the shallow end with a SE Custom 24 Floyd. I've only had it for half a week but I'm very impressed with it.

Looking forward to getting to know everyone here!

In the meantime, here's an impromptu pic of my guitar!