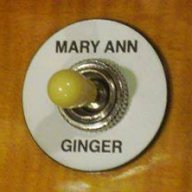 Occupation:
Defender of the Universe

What Would Evel Knievel Do?, Male, from Northern VIrginia