Some of you will remember that I had pretty bad accident back in February, when I went head on into a vehicle that crossed the double yellow line. As a result, I spent the rest of the day in the ER and out of work until June with a broken hand. During my recovery I bought my SE Hollow Body II and signed a post-it note contract* saying I would not buy any more guitars. I was fine with that my collection was reasonably diverse for what I do. I mean I have a CU24, a 245, an A55e, a Bass a HBII and a vintage Santana. I really didn’t need anything else. Fast Forward to October 2021.

*It was determined that contract was neither legal nor binding.

Don’t skip to the end, this story gets better, I promise.

Back in October, I got a call from my Personal Injury Lawyer (whom, shall remain nameless), who told me the opposing Insurance Company was going to settle for the full amount of the other drivers Insurance coverage. (Yeah Me!) The wheels immediately started turning. The gears started clicking. What do I do, what do I do? Invest? New Car? New Truck? New Boat? New Guitar? SCREECH (of needle across a vinyl record). Wait didn’t I just say I signed a Post-it note contract* saying I wouldn’t buy anymore guitars. Dang it, I did. (Pac-Man Dying sound effect). I could still buy a new car, trade in the Mustang for a newer model, or something more winter friendly. Nah. I could buy a new Boat, but would need a new Truck too, not enough money. I could just buy a new truck, Nah, I want the boat too. Over time, I came up with a plan. A Big plan, the Biggest Plan.

Don’t leave yet, I’ve only just started to paint this picture.

I needed a plan that both fulfilled my wants and needs, and made the wife agree to them. But when to let the cat out of the bag, when do I spring the trap? Driving home from a hockey game or concert recently, we (the Mrs. and I) were just talking about things in general, when the subject of guitars came up. She asked how I would be able to afford another guitar, I didn’t have enough money. Never said a word about the post-it note quasi contract hanging on the fridge. *PING* I had my in, my heart went pitter patter, I swallowed and managed to say, “Well, I’ve got a plan.” And then explained how I was going to invest the majority of the settlement, trade in one or 2 guitars to buy a new core guitar, buy some car parts and put the rest into a vacation somewhere, maybe a cruise. “Sounds reasonable” she says. SNAP the trap has been triggered.

THE END IS NIGH

I got the call recently that a portion my case was complete, and I could expect settlement shortly after signing paperwork. Paperwork signed and notarized I started window shopping on Reverb. I was told it would probably be mid-January before I saw a check, but Merry Christmas to me, it arrived at the lawyers on the 23rd and mailed to me on the same day. I got the check on Monday, and deposited it later in the day. Of course the bank put a hold on when they would make the money available to me, so I had to wait until Thursday to get my hands on the cash. I’m not as patient person as I used to be. So I have been chomping at the bit all week. As I am sure you are having read this far into my story.

I looked at a lot of Guitars on the ‘verb. Red, Blue, Pink, Purple Natural, 10 Top, Wood Library, 509, CU24, CU22, 594. So many choices, so many vendors, so many decisions. After flip flopping on so many variables I finally decided on the one.

Checked the bank account, yep the money is there. Drove 2 hours and lugged 4 guitars into the shoppe. Tried out the new one while the shop owner and his luthier looked at what I brought in. Loved the guitar, played for about 20 minutes and walked out to finalize everything. His offer for what I had was good and the price was right for what I wanted, so I said ‘let’s do this’ Slipped in in the card, TWEEEET Flag on the play, payment declined. Tried again, TWEEEET Personal Foul #67, Offense, Account Locked Penalty. Friggin’ banks. (apparently I neglected to up my daily spending limit.) So embarrassing to have the bank not allow you to spend the money that is rightfully yours, AND INFURIATING! Tried calling the bank, they of coarse closed at 1 because today is Wednesday in America. Called the wife for her thoughts, finally decided to call the bank in the morning then head up to the store on our way to her mother’s on Thursday. Ironically, 5 minutes after I left the shoppe, I get a text from my banks fraud department asking If I tried making a purchase at Northfield Music for $xxxx.xx. whoever I talked to at the bank agreed to allow the release of funds tomorrow as a one time purchase. My head hurts.

I give you Amber McCarty the Sunburst McCarty 594. I named her after the daughter I lost in ’95. I’ve been back to that Walmart every day since, and still can’t find her.(JK) I tell people that joke all the time, sometimes they know I’m joking, sometimes they take me way too seriously. 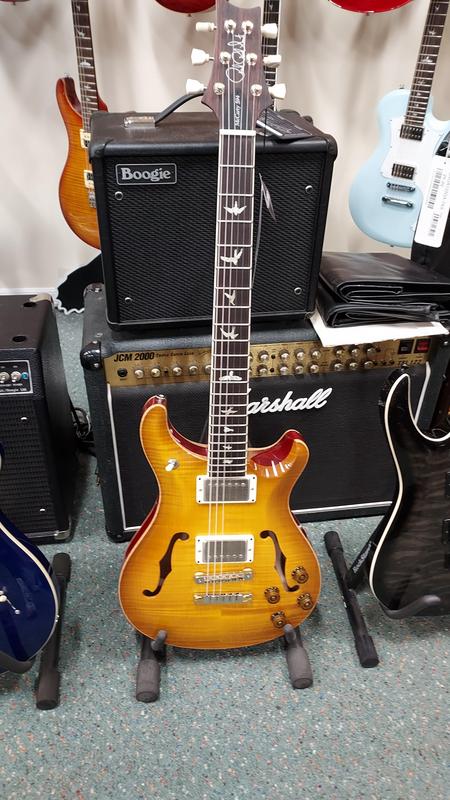 As I only took one picture of the guitar in shoppe, I will have to take the requisite million more once I get to my destination tomorrow, at the latest, Friday. Yeah I know, kind of a let down after all that build up.

So very nice and well deserved for what you went through! Love the color, too, absolutely beautiful! Congrats! How does it compare to the SE HB?

Warmart said:
So very nice and well deserved for what you went through! Love the color, too, absolutely beautiful! Congrats! How does it compare to the SE HB?
Click to expand...

It feels about 2 pounds lighter, it weighs in at 5lbs 13oz. The flame and grain are more pronounced, it could have been a 10 if not for a small dark mineral stain on the back. The 58/15LT's are really as warm and articulate as others have claimed. There is a noticeable difference between the SE and Core pickups to my ears. I liked the SE HBII, I like the Core 594 more.

I'm not let down. That guitar is amazing.

Still half expecting a boat pic though.

GarrettIvo said:
I'm not let down. That guitar is amazing.

Still half expecting a boat pic though.
Click to expand...

But I will need a Truck pic to tow the boat pic.

Congratulations. Stunning guitar. Who needs a truck and a boat when you have a guitar like that?!

Glad you are okay, interesting story, and congratulations on your new great looking guitar!

Boats suck in the winter.
Congrats on your new 594HB. It’s beautiful.

Congratulations beautiful guitar and I’m happy to hear you are doing better!

After a story like that, who needs a guitar? (Just kidding, I’m envious)

Most excellent!
Enjoy.
A

Sounds like you're right n the good side of recovery, and those wife's can be a good bunch sometimes!

Really beautiful axe and very glad something good came of your ordeal man! When I read your initial report of your accident it could have gone a much different way.

Alnus Rubra said:
Congratulations. Stunning guitar. Who needs a truck and a boat when you have a guitar like that?!
Click to expand...

TWIS (Thats What I Said)

A fantastic guitar like that needs a proper story. Well done!

Congrats on a beauty!

What a beauty! Glad to hear it all worked out for you. There’s really something special about the 594’s… I have a solid body, and could definitely see a hollow body in my future.

My name be scrambled

Well, today was an adventure.

Got up to the shoppe 5 minutes after they were supposed to be open. Not open. 10 minutes later the owner rolls in and apologizes for running late. No sweat, I'll just pay for my fiddle and git. Nope, the wife spotted a P20 she liked and wanted to try it. She did but didn't like it, said it was too tinny. (No bottom end) so, the owner suggested a Guild Parlor size, which she wound up getting. Finally, 3/4 of an hour later we finally left the store with 2 new guitars in hand. So it is now officially an official new guitar day.
You must log in or register to reply here.
Share:
Facebook Twitter Reddit Pinterest Tumblr WhatsApp Email Share Link
Top