Damn, it looks like a 3/4 scale guitar next to him! lol 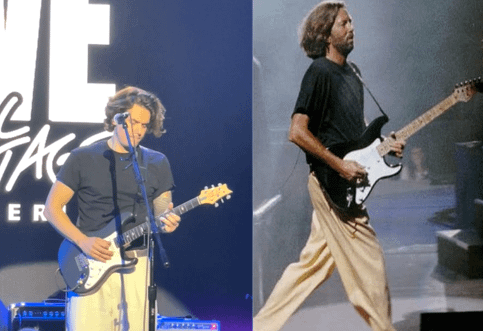 ...as seen in the PRS company magazine

I had exactly the same look when I saw this guitar the first time.

By Matt Owen published 1 day ago 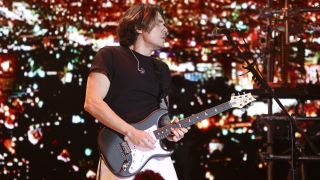 Since its arrival in 2018, John Mayer’s PRS Silver Sky signature guitar has been treated to a handful of aesthetic updates, and is now available in a range of bold and striking finishes. When paired with the PRS SE Silver Sky – which introduced four new colors – the total number of Silver Sky hues is considerable.
According to Mayer, though, there are finishes the general public has never seen before, with the Sob Rock star saying he has a secret collection of Silver Skys with colorways that would make people “flip out”.
While in conversation with Cory Wong on the funk maestro’s Wong Notespodcast, the pair discussed their respective signature models – a conversation that unearthed the fact that Mayer wanted to call his latest Roxy Pink Silver Sky something else.
“I’ve got a couple of Silver Skys at home that, if people were to see the color, they would flip out,” said Mayer. “I’ve got the Roxy Pink one. The color… I kept wanting to call it Eraser Pink, but everyone else at PRS just did not like Eraser Pink.”
RECOMMENDED VIDEOS FOR YOU...
Sophie Burrell NUX Cherub - demo
The Eraser Pink tag would have certainly introduced a particular style to the range and, in a stroke of classic Mayer marketing genius, would have been partnered with a similarly stationery-themed Pencil Yellow iteration.
“I thought, ‘What if you made this, and you made Pencil Yellow?’” Mayer continued. “For 20 minutes, it was like, Eraser Pink and Pencil Yellow, that would be sold in a giant pencil case.”
If you need help visualizing what that would have look like, Chibson shared a classically Chibson-ified image of the two "guitars" on Instagram.
As for the colors that would make us “flip out”, Mayer remained tight-lipped, though reiterated his long-held stance that vintage-style finishes, such as sunburst, would never make their way on to the Silver Sky, which instead would be reserved for Tesla-esque colors.
“It takes younger people to make a guitar a little more like the other things we own,” he said. “Tesla. Apple. Everything else in our life has this smoothness to it – has this design language to it. We’re going, ‘Knock, knock, guitar. Come on. You’re still in sunburst and tortoiseshell.’”
Whether we actually see the Pencil Yellow version in the flesh remains to be seen, though perhaps the lack of an Eraser Pink counterpart would take the sting out of it. Whatever the case, it sounds almost certain there are more PRS Silver Sky finishes on the way.
There will be a part two of Wong and Mayer’s chat, which promises a whole lot more guitar playing, so head over to Cory Wong’s Instagram to stay up to date.

Matt Owen
Matt is a News Writer, writing for Guitar World, Guitarist and Total Guitar. He has a Masters in the guitar, a degree in history, and has spent the last 16 years playing everything from blues and jazz to indie and pop. When he’s not combining his passion for writing and music during his day job, Matt records for a number of UK-based bands and songwriters as a session musician.
Click to expand...

Bought a Tungsten Rosewood over the weekend. A used 2020 that looks to be in good shape, at a great price. Should be here on Friday. I’d been going back and forth between a used DC3 that was at a pre-pandemic price and a SS. In the end, I decided I’d like to try the 7.25” radius.

RC Mike said:
Bought a Tungsten Rosewood over the weekend. A used 2020 that looks to be in good shape, at a great price. Should be here on Friday. I’d been going back and forth between a used DC3 that was at a pre-pandemic price and a SS. In the end, I decided I’d like to try the 7.25” radius.
Click to expand...

Tough choice to make, but I love my SS and I hope you do too! Congrats.
B

We saw Mayer in SLC last Friday night. His primary guitar that night was the prototype matte black Silver Sky. All I know is that if/when PRS announces this finish as the next Silver Sky - even if it is a limited edition one - I will gladly put down a deposit for one. Something about matte black just does it for me.
K

Through a series of errors on my part, I ended up with a few other guitars and have come back to the Silver Sky. I’ve reserved one and was told to expect it around May 2023.

Sorry in advance for this overly asked question but, here it goes anyways ... I'm in the edge of buying my 2nd silver sky (already have a launch year Tungsten model) and was wondering when the specs were updated? There are some stores that have the Golden Mesa maple version still and that would be my pick if it has the newer specs.

Thanks in advance!
R

So I've had my Silver Sky for a few weeks now. I've mostly played it during that time, and it's just grown on me so much. It took a couple of nights to get it set up right (it came from beautiful California, and I'm in chilly Minnesota). It's just a delight to play!

There are a couple of things about it that surprise me. Its tuners! I thought I'd dislike the plastic tuner buttons. I actually really like the way they feel! The tuners themselves are so smooth to use, and feel so "right" tension-wise. I like them better than my Phase II, Phase III, and whatever the ones on my CE24 are called.

The neck just feels right. I've got the nitro-finished neck. The size, shape, and feel in the hand seem great to me. My favorite PRS carve is probably Pattern Regular. I've got a Wide-Fat (almost typed Wife-Fat!), Pattern Thin, and a Pattern Vintage. There aren't any I dislike, but the Silver Sky's neck feels really good.

The radius isn't an issue. The frets are great. It took me a bit of truss rod adjusting to get the buzz out, but it's so very nice now. I'm a completely unskilled guitarist. I'm digging the radius in terms of how chords feel to me. I find it easier--actually, that's not right. It's that when I go back to my 10" radius guitars I find it a bit tougher get my chord shapes together.

I played my 2021 CE24 after playing the Silver Sky tonight. Such a different guitar. I kept comparing the two, wanting to pick up the Silver Sky again. My CE22 gets some time more often. I play the Mira upstairs. My poor 594 is just living in its case, waiting to be re-discovered. The Silver Sky just keeps calling my name.

I don't get much quack in 2 or 4, and I think that might lead to some pickup height experiments down the line. The pickups sound so very nice to me. I don't have any other single-coil guitars. Last one I had was an SE EG that I got rid of after a month last year. The pickups in the SE EG felt a bit dull to me. My Silver Sky was a later 2021 build, so don't know if it's got the newer or older pickups. Part of me is curious, part of me says to just enjoy not knowing or caring.

I wasn't entirely sure when I bought the guitar if it would be for me. I'm really happy that I took a chance on it!
G

Picked up a DGT today but have not received yet. I have been browsing the forum and have not been on in a while. I had posted early on this feed back in 2019. Picked up an original Tungsten (missed the hard case group by a few numbers). Mine had the static problem and I ran a piece of copper ground under the pick guard. My knobs have all worn off the numbers. But I will say, still the first thing I grab when I walk into the room, main Strat then my Suhr Strat. Just a phenomenal guitar and would say it would be my dessert island guitar. I have realized I like the guitar because it is light and just comfortable to play.
K

Here for the party

Knightrich said:
People that have played a bunch of maple and rosewood versions, are the maple on average THAT much thicker than the rosewood?
Click to expand...

My maple SS board is the same thickness as my rosewood SS board.

If you are asking about physical dimension, the answer is no.
K

Will we see new colors at NAMM? I see the Golden Mesa and Orion Green have been discontinued. Seems like we may get a matte black and maybe something else. Wish I knew when to expect the announcement as I’m on the fence about picking one up before then.

Here for the party

Don’t forget about the chrome from the Superbowl…

Knightrich said:
Through a series of errors on my part, I ended up with a few other guitars and have come back to the Silver Sky. I’ve reserved one and was told to expect it around May 2023.
Click to expand...

Ha, that’s how I ended up with my wife… of 34 years. Hope you can match that with your Silver Sky.
K

John F said:
Don’t forget about the chrome from the Superbowl…
Click to expand...

I thought about that! I wasn’t sure if that was a third party refinish or a real PRS job.

John F said:
Don’t forget about the chrome from the Superbowl…
Click to expand...

It was a wrap done for the super bowl. Won’t see it in production more than likely.

Can anybody compare the pickups between the core and se models? I’m demos they sound near identical.

As for colors, I’m hoping for some cool ones like turquoise, deep yellow, and metallic purple.