Davey said:
Updated, no new pedals, just pedalboard.
Took a stab at a homemade one with some leftover scrap hemlock from my downstairs remodel a while back. Didn't turn out too terrible. Might do another one after using this one for a while and incorporate any alterations or upgrades.

Folks’ pedalboards are so personal to their needs, and so interesting to check out, so I love this thread! Made a couple of small changes to my board in the past couple of weeks that I thought might be of interest.

I have enough amps that do medium to high gain that I wasn’t using the Iron side of my Pettyjohn Pettydrive 2, but I use the lower gain Chime side a lot. The Chime is sort of in the Vox AC30 direction. It doesn't make an amp sound exactly like a Vox, but it adds a nice bit of grit to a clean tone, has some nice tone shaping controls, and a choice between germanium and LED for dirt, or you can blend them.

So I decided to get the Chime 2 with its new tweaks and higher headroom. I also had Pettyjohn add their upgraded discrete op-amp mod for even greater headroom and clarity. Sounds wonderful!

Because this change freed up a little board space (the PD 2 is a double-wide pedal), I added the Pettyjohn Edge preamp for more of that Tweed style ‘hint of edge of breakup’ with a clean amp. Another great one from Pettyjohn. The PD2 is headed out to my son’s studio in LA.

Everything else is the same as my post from last year. The Schmidt Array boards have a patchbay on the side, and two of the I/O points are normalled. I set up the normalled points as an insert between the two H9s so that I can, for example, use one H9 for a second amp, or insert a volume pedal after the first H9 and before the second one so repeats on the second one continue when I pull back the volume. I also like to use these points to insert a real tape delay when using H9#1 for modulation, and H9#2 for reverb. Echoplexes and Fulltone TTEs don't have a buffered output, so having one H9 with a buffered out after the tape echo preserves high frequencies on the way to the amp. I occasionally think about finding an EVH Phase 90 just to continue the theme. 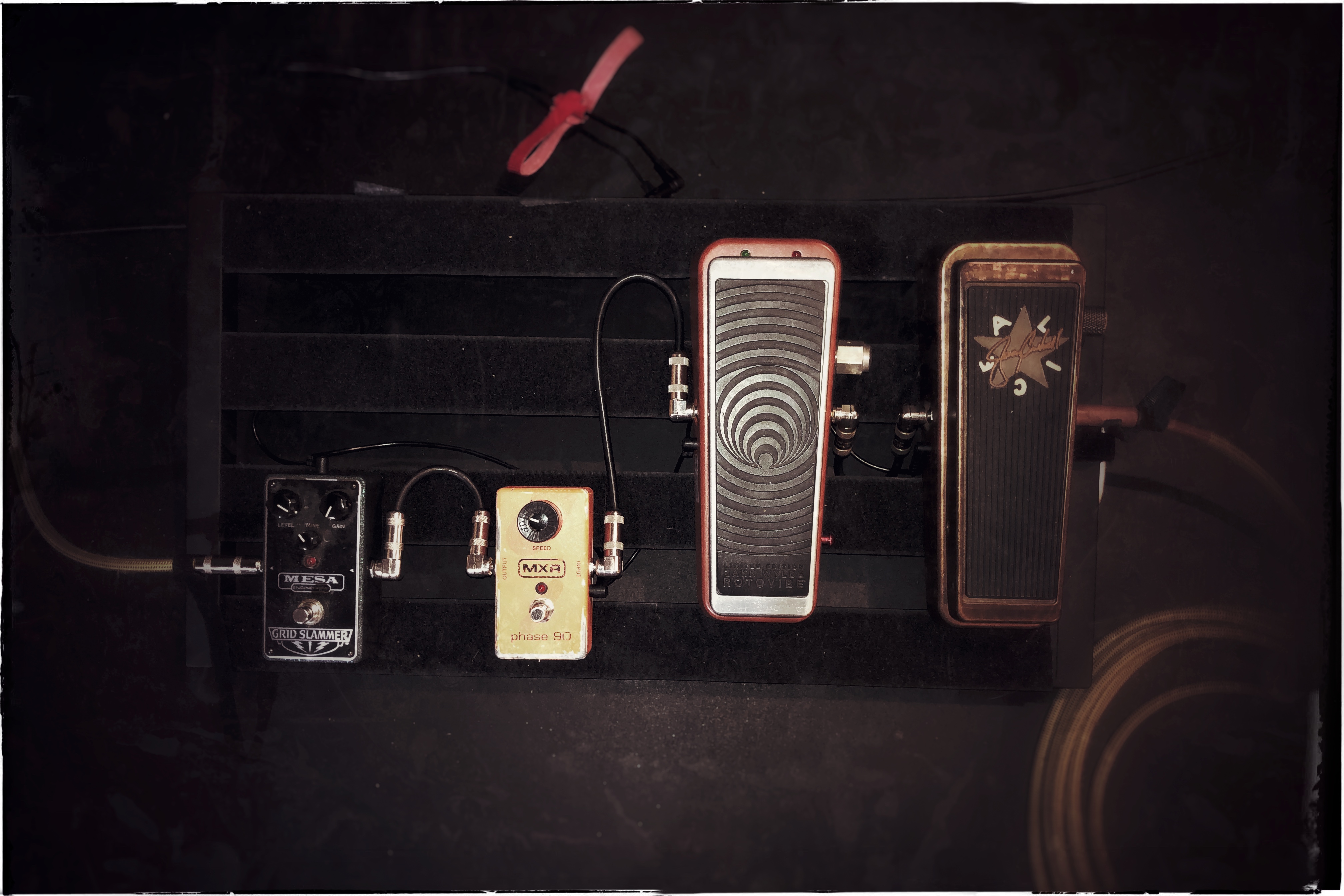 My EVH board, built it last year after he passed. 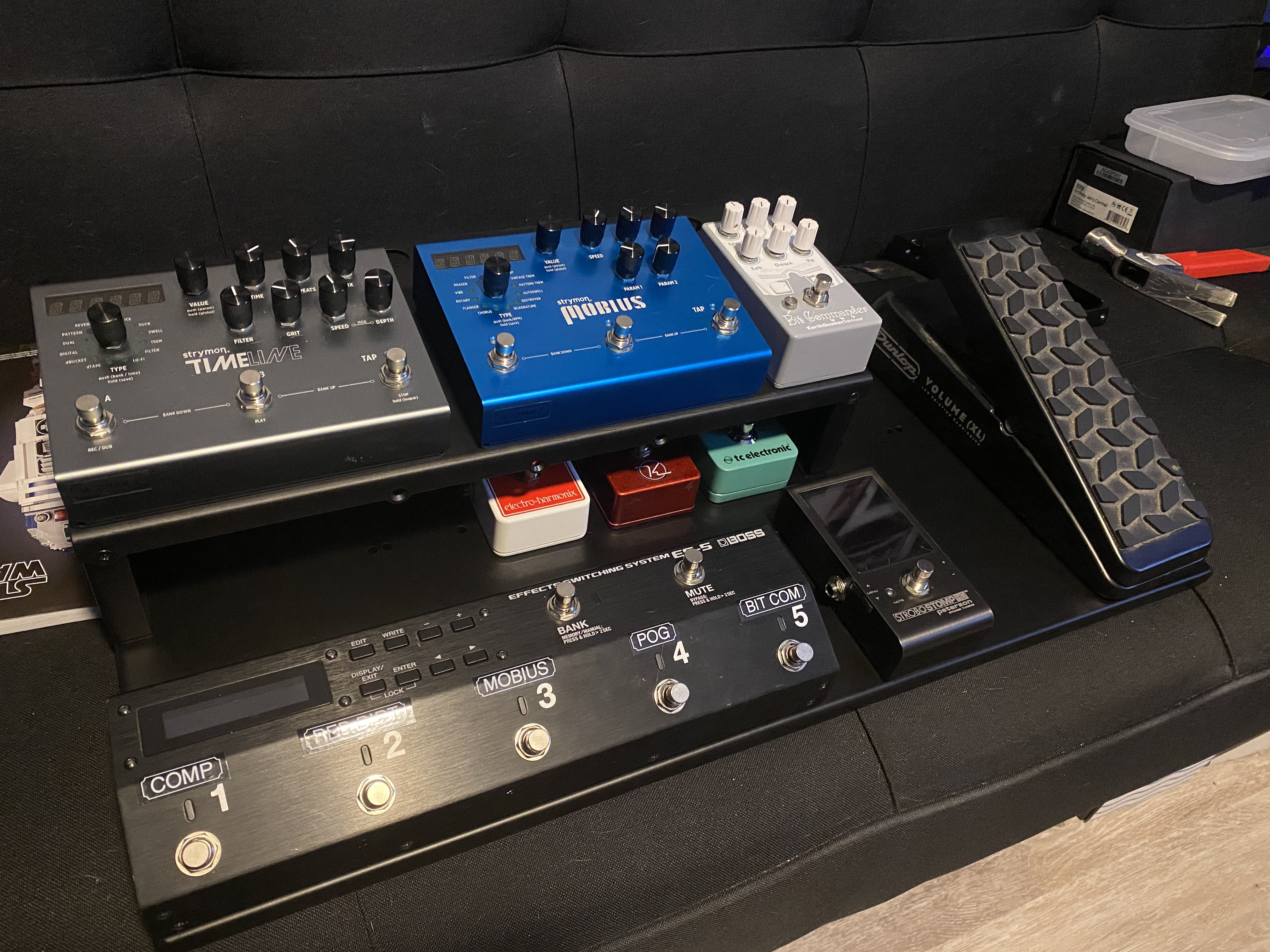 TimeLine, Mobius, EQD Bit Commander, EHX Nano POG, Kelley Red Dirt OD, TC Hyper Gravity Comp and StroboStomp HD all controlled by the ES5 (TimeLine in the FX loop of the amp and Mobius Ran Pre/Post, Pre into the ES5 and post looped into the Timeline)
Have an EB Vol pedal coming instead of the Dunlop. Was will sit off the board if i decide to use a different one and an exp pedal for the Timeline will also sit off the board if i want to use it or not.
Need to get a Zuma Power Supply and the parts to build the patch Cables

And this would be my AxeFX III Board 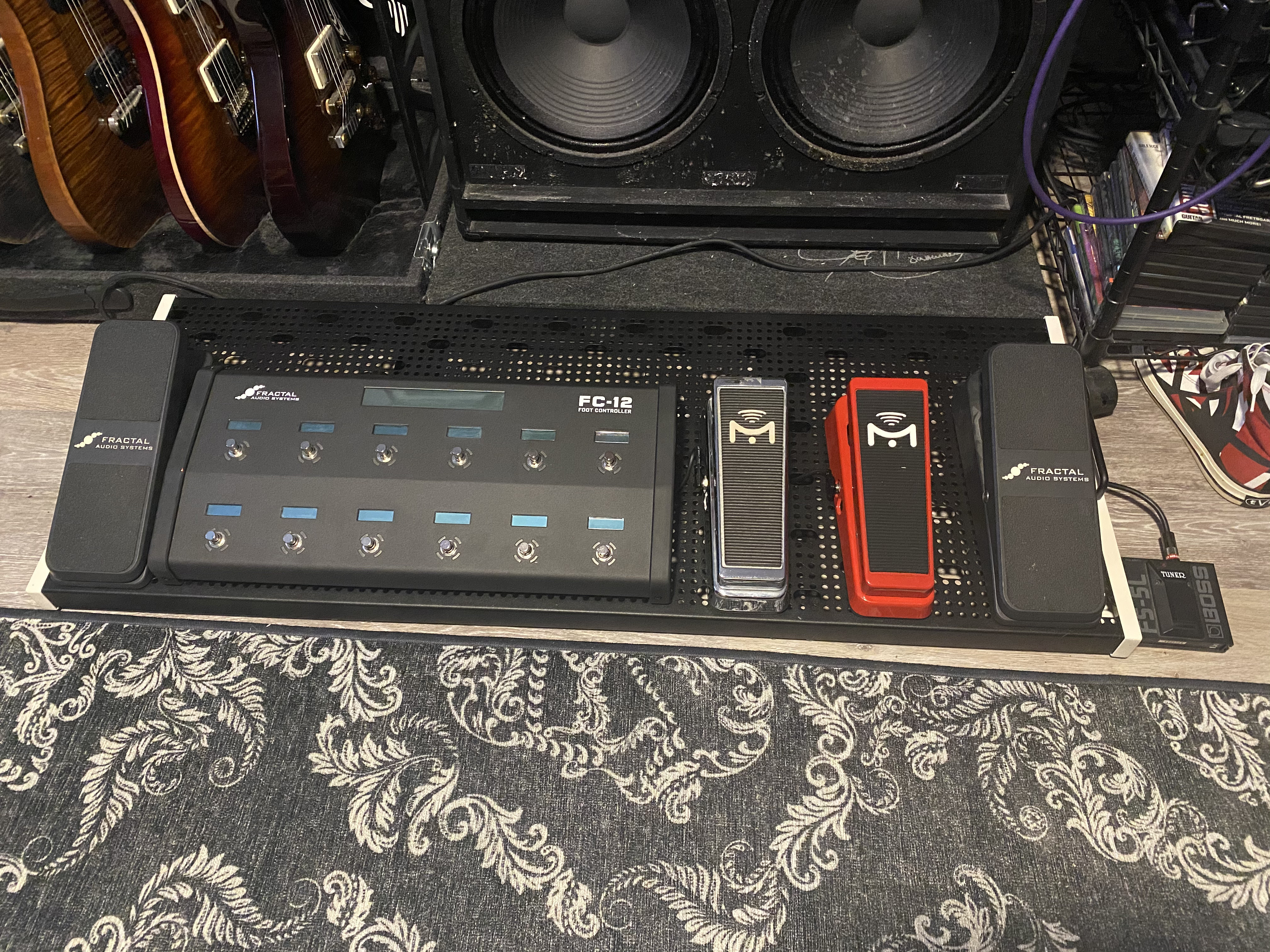 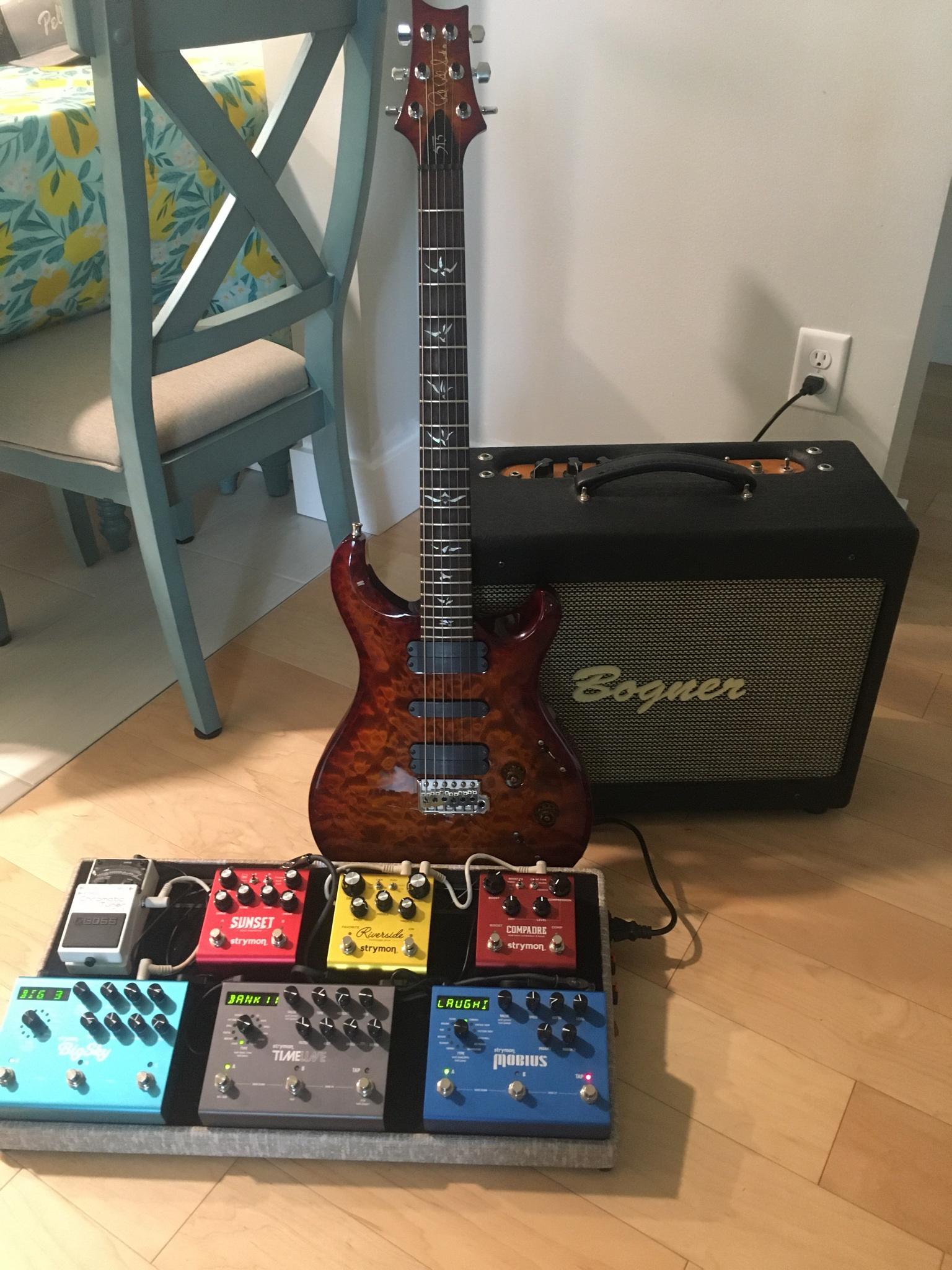 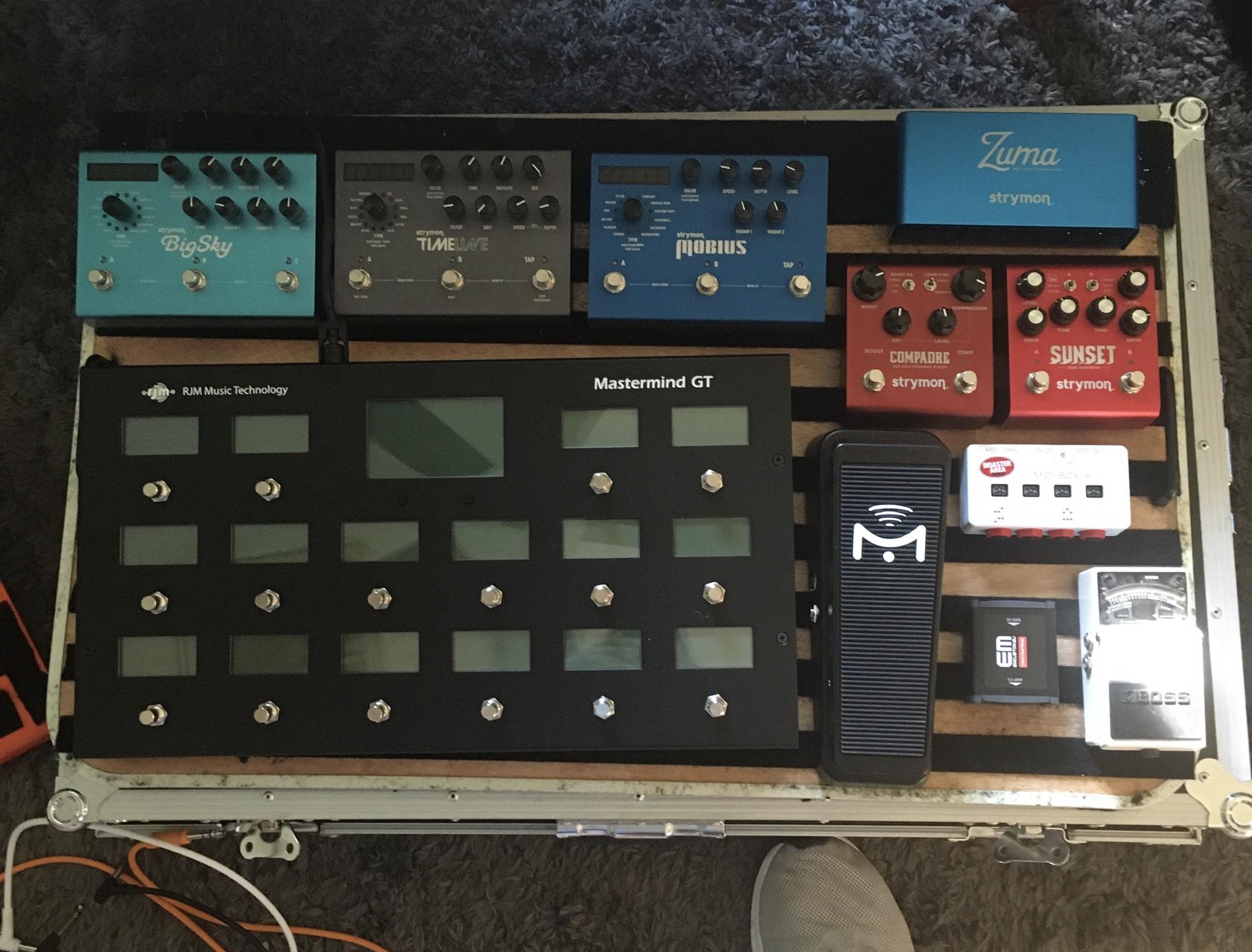 I went all Strymon pedals with an idea to make a midi board. The RJM is insane and can be programmed for any combination I need while also controlling my main amp(Mesa Mark V). Can go as far as having set list and banking to the next song and every preset is ready for me. Still a work in progress so I have a smaller board I use the old fashioned way.

Finally got the new board all wired up. Sounds killer Rich5150 said:
Finally got the new board all wired up. Sounds killer

Nicely built Rich!
Out of curiosity, how much does this weigh? (That was my only problem with pedalboards...)

Jazzedout said:
Nicely built Rich!
Out of curiosity, how much does this weigh? (That was my only problem with pedalboards...)
Click to expand...

Thanks Ill have to weigh it and let you know. If I had to guess its under 20lbs.

Jazzedout said:
Nicely built Rich!
Out of curiosity, how much does this weigh? (That was my only problem with pedalboards...)
Click to expand...

Ok i was a little off lol, its about 23lbs, Which i still don't think is too bad. I don't think i could get it much under that TBH.

One of the reasons i went with the strymon pedals was to get multiple sounds out of as few pedals as i could, the POG and Bit Crusher are there just for fun. Comp is just for clean and the Red Dirt is a little lead punch.
You must log in or register to reply here.
Share:
Facebook Twitter Reddit Pinterest Tumblr WhatsApp Email Share Link
Top