Jericho said:
Bodia, I have a whole bunch of tunes here...............https://www.youtube.com/channel/UCpz04GyeUleBPP9vjfANvWQ
Click to expand...

My Rare CE 24 through a driven Marshall stack.... 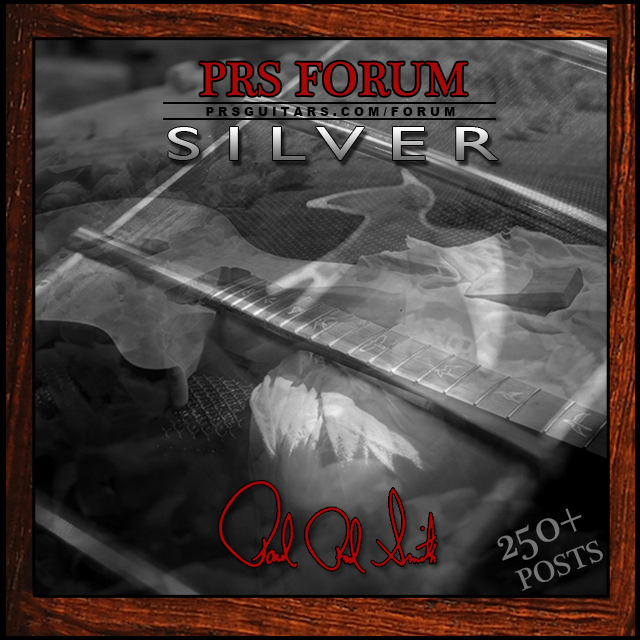 dkilpatrick said:
Jamming out on my 594

Here are a couple from my band "A Few Remain". Featuring my DGT (w/ "\m/" bridge pickup) and my Tremonti SE.

We Fix Flats! has another instrumental uploaded called 'Moore-Green'...the usual disclaimers about tone, intonation, note selection and mix apply. Also there's Ozihce-TX that might be interesting too.

WeFixFlats said:
We Fix Flats! has another instrumental uploaded called 'Moore-Green'...the usual disclaimers about tone, intonation, note selection and mix apply. Also there's Ozihce-TX that might be interesting too.

Nice! I totally get the "Moore-Green" vibe!

bodia said:
Nice! I totally get the "Moore-Green" vibe!
Click to expand...

Yeah, I thought it would be apropos to title the medley after those two giants since I borrowed from both. Thanks for listening.

Played an all day local band festival on Saturday. The only video so far was sadly with my non-PRS home assembled baritone.

What? I get a title?

Check this out - it is a trailer for a short film that my band, Hard To Port, contributed the music to.


The music featured in the trailer is me on rhythm and lead guitar (my P24), me on bass, and my wife on Bodhran (Irish Drum). The rest of the band contributed to other music, which we presume will be heard in the rest of the film (even we haven't seen it all yet!)

This was done for the San Diego 48 Hour Film Project competition last weekend.

It was a very interesting and exciting experience finding out a basic idea on Friday night, having a script first thing Saturday morning, creating the music by Sat noon before we see a single shot of film, getting it mixed/produced and submitted by Sat evening, all the while the filming is still going on which we still haven't seen, then the whole next day is the post-prod folks editing it all together!