Random. No more or less

Other phenomenal bands were Blue Oyster cult, Kansas and Boston.

Lola said:
I don’t care who I see as long as I am at a concert.
Click to expand...

Hey, you're in good company!

The bands don't care who's at the concert as long as people pay for the seats they're putting their behinds in!!
Last edited: Jul 23, 2022

I have seen hundreds of concerts but I am most disappointed that I never got to see Gary Moore live. I mean of course for guys that were alive when I was old enough to go see them, I mean Hendrix is a no brainer but I was like six years old……

Has anyone seen the price of seats for Springsteen in Philly next year? O M G!

i read on worldstar that les was starting up an orchestral livestream with a dial in celebrity jam at the end, and jokes and puppets.

Wakester said:
Has anyone seen the price of seats for Springsteen in Philly next year? O M G!
Click to expand...

We had a chance to see Bruce 3 or 4 years ago In Cranbrook, but there was a mixup in our hotel reservations so we travelled on to another location for lodging. Tickets were extremely reasonable given that they were kind of poor seats. But we would have gone if the hotel wasn't such a bunch of dorkwads and refused to adjust our booking (they weren't full up either). Had never seen The Boss so that would have been a great night.
Dang Lola, to see Edgar and Johnny together would have been epic!

Ravi Shankar and his ensemble opened. They took the stage, and after the first couple of minutes, the audience broke into a huge round of applause and cheering.

"Thank you, but we were only tuning," said Ravi.

Here are my favorite concerts:

My son's band opening for 30 Seconds to Mars in Detroit.

My son's other band opening for The Academy Is, Detroit.

Bob Dylan, backed by The Band.

Aaron Copland, conducting Fanfare for the Common Man and Rodeo/Billy the Kid

David Bowie. The Cars were the opening act.

Clapton, with my son, when he was in high school, which made it SO much better

My band opening for Commander Cody and the Lost Planet Airmen at a festival (and gosh were those guys good!)

When Johnny and Edgar played together I wish I knew now what I know about playing then.

The crowd went absolutely mental when Edgar broke into Frankenstein.

Johnny was so brilliant I was young an didn’t fully appreciate his playing like I would of now.

I will never forget when he played Johnny be good. I think he was one of the top 5 slide players as well. A memory that I will always cherish. I bought some slides. They sure need some work.
Last edited: Jul 25, 2022

Fender Mod Shop: pretty cool concept. I went in on a strat. Arrived today. Very sick. Probably best sub $2k strat I’ve ever received. Arrived like a PRS with the bridge perfectly floated and in tune. I honestly didn’t even think a fender could stay in tune when shipping. 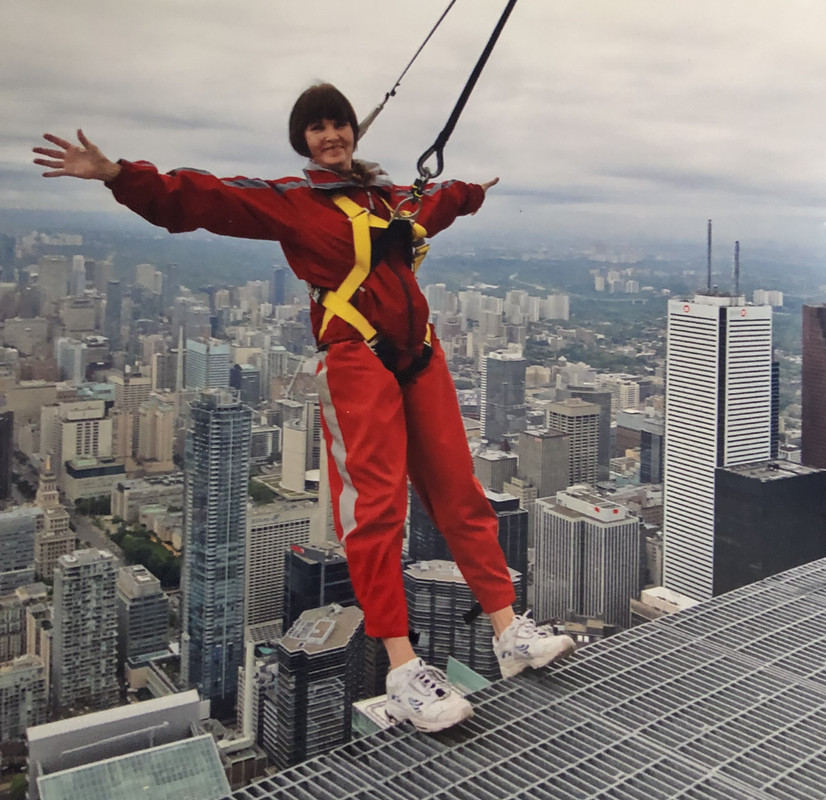 This is the CN Tower Edge Walk! I loved it. Want to do it again. Either that or sky diving.

Nice! I've wanted to do that since I first saw a video about it (complete w/airplanes flying below the people walking). I love CN Tower.

And I've gone skydiving. Very cool experience. Oddly, I don't remember any sensation of falling (like you feel on a rollercoaster). I did find out how extensive my vocabulary was in the few seconds between when I let go of the plane and the chute opened.

DreamTheaterRules said:
How high are you? (In feet...)
Click to expand...

based on what? Those buildings behind her?

According to the stats, the walk is 1168' AGL! I'd puke and pass out I think, not necessarily in that order. For reference, that's 168' higher than circuit (you all in the US call them patterns) altitude at an airport.

DreamTheaterRules said:
based on what? Those buildings behind her?
Click to expand...

Angle of the sun, size of harness, shoe size and arm span. Oh and that smile looks like it belongs to someone who’s 5ft 7!

Alnus Rubra said:
Angle of the sun, size of harness, shoe size and arm span. Oh and that smile looks like it belongs to someone who’s 5ft 7!
Click to expand...

aha! Shoe size! Should have known.

Perfect guess! That’s what I am.