So folks, this is by far my most special NGD yet, in the making for more than a year. Also, my first time speccing and designing a guitar exactly to my needs.

Change #1 Neck shape, material, fretwire (Inspiration: 513, Modern Eagle 1)
Pattern Vintage is universally adored but for me, no PRS had felt truly home till I played the Wide Fat Neck on my first 513. Also after I acquired my first 513 Rosewood (Brazilian Rosewood Neck) and Modern Eagle 1 (which also had a wide fast neck), I knew I wanted the unfinished rosewood neck.

Sadly since I do not live the USA, I went with Kingwood, which I was reliably informed was as close as one could get to old growth Braz.

Change #2 Pickups, electronics and Bridge (Inspiration: Tremonti, P24)
The 594 58/15 LT Neck Pickup is perfection and makes angels cry..no messing with that. However for the bridge, given my modern metal and djent proclivities, I knew I needed a ceramic pickup. I had no experience with the PRS 'metal' but had loved the bridge on my artist pack Tremonti. Also left it uncovered for extra bite.

The other thing, which was a must, was a Piezo. Opeth is my favourite band and my band also plays the occasional acoustic gig. I've been eying Mikael Akerfeldt's rig for a while and love his White P24. In my mind's eye, I have convinced my band to cover BlackWater park and jump seamlessly from the riffing to the beautiful acoustic section.

Lastly it had to be a tremolo. I am one of the card carrying members of the 'give us a 594 trem' group, and I seriously wish it was an option on the core, but hey, this is one of the advantages of going Private Stock

Change# 3: Body Shape (Inspiration: Guitar sanctuary Eclipse PRS Custom 22/24, Custom 24 Singlecut thickness)
About 3 years ago, there was a PRS guitar that stopped me in my tracks. The split top Custom 24, specced by Guitar sanctuary, also featured on the Private Stock Website was the most beautiful thing I had seen, so my Private Stock had to be a split top.
https://www.prsguitars.com/index.php/privatestock/gallery_guitar/ps_7125_custom_22
Additionally at the time of speccing, I had just acquired a beautiful Custom 24 Singlecut thickness from Japan, so I knew the extra girth was something I wanted.

And Finally:
It turned out much better than my wildest expectations (thank you PS Team for making the choices on Satin Nitro and Black back). The left side (Curly Maple) reminds me of Dragon skin and the right side (Buckeye Burl) looks almost like a fossilised dragon egg. The image that struck me when I first saw it was a dragon emerging from an egg, and consequently it took little imagination to name it after the mother of dragons 'Daenerys' from the Game of Thrones, taking inspiration from the iconic Birth of Dragon's scene.

Here are the photos, taken unprofessionally by me. Enjoy!
Full detailed video with sounds coming on my Youtube channel shortly 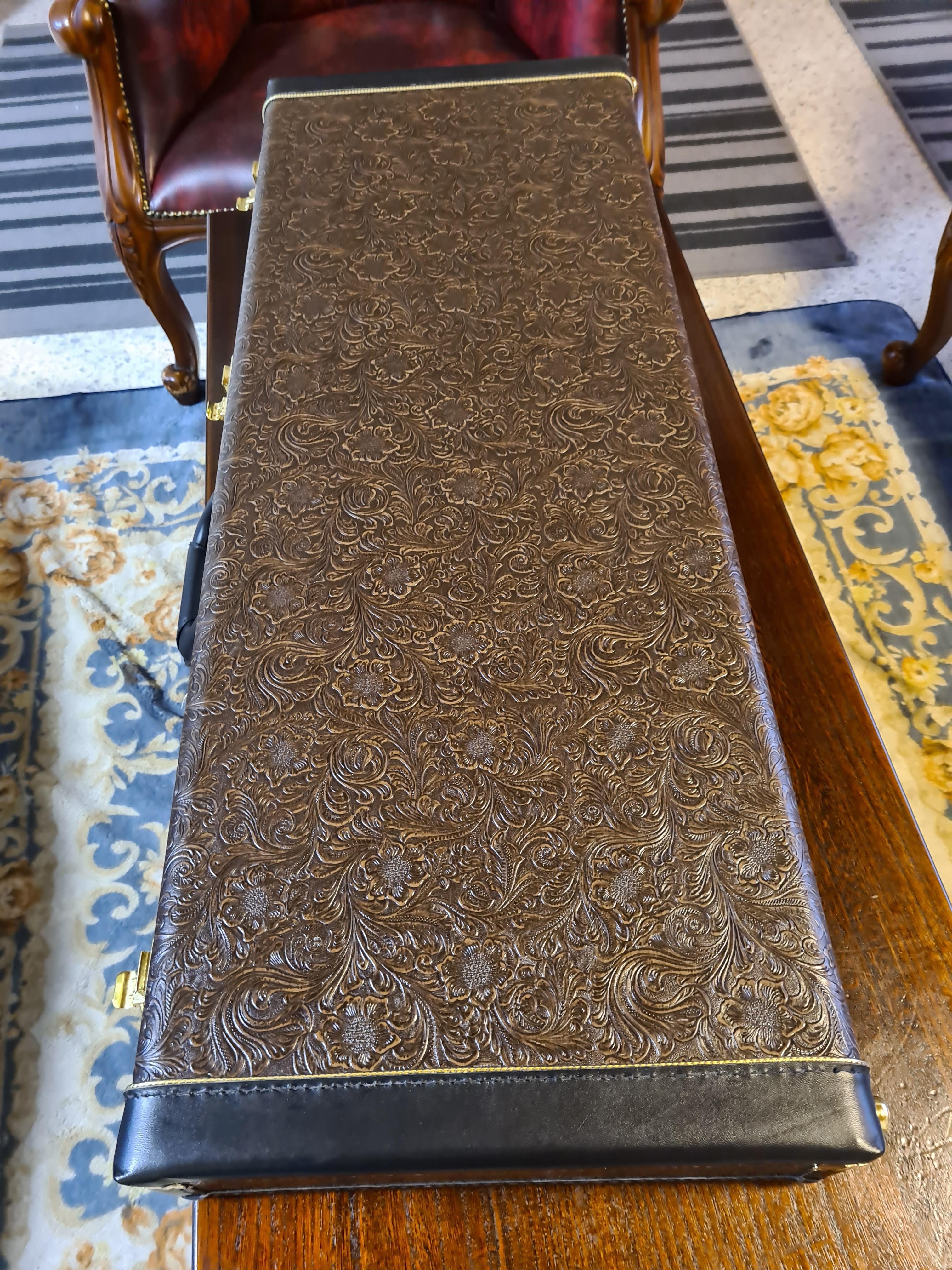 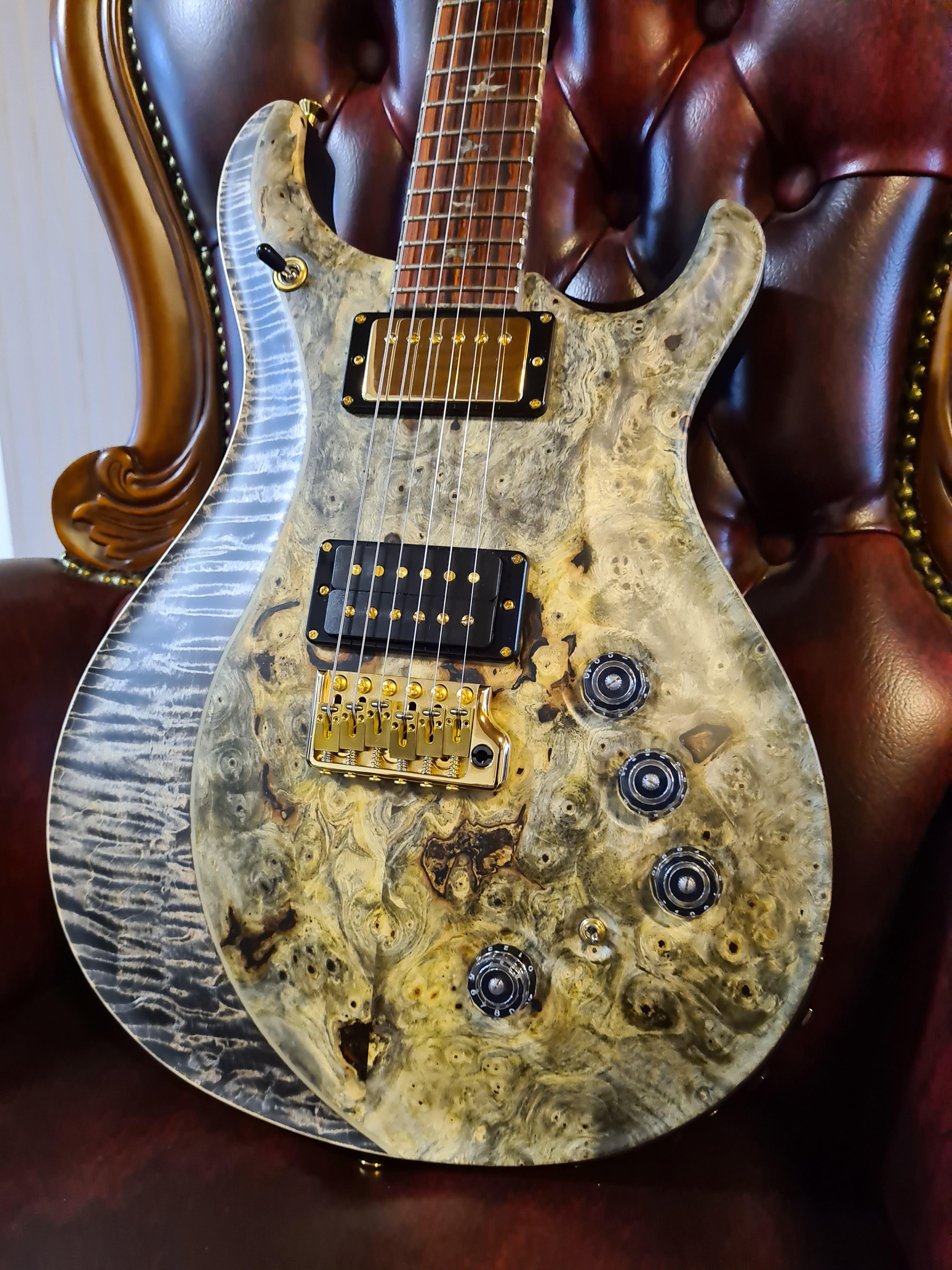 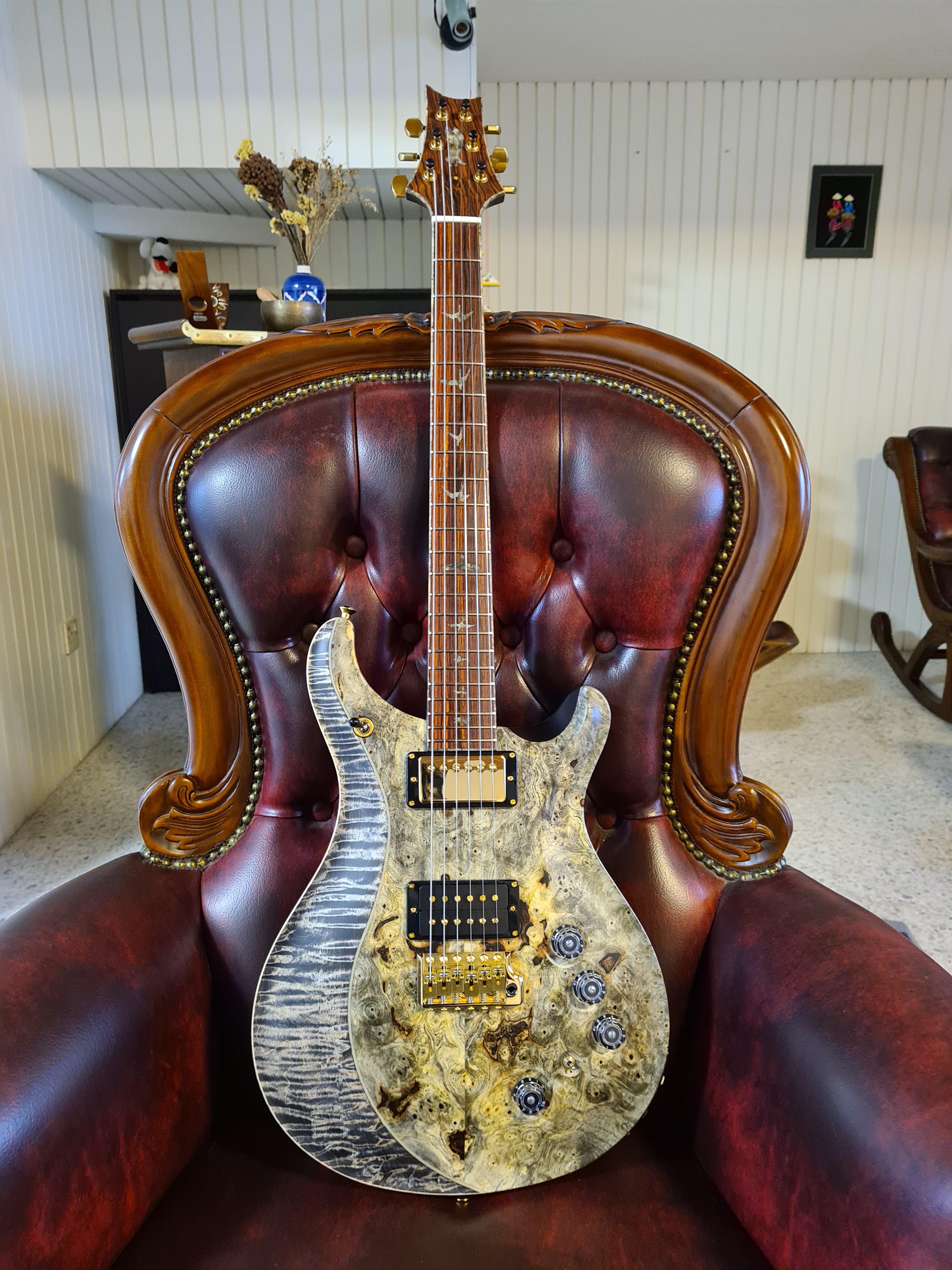 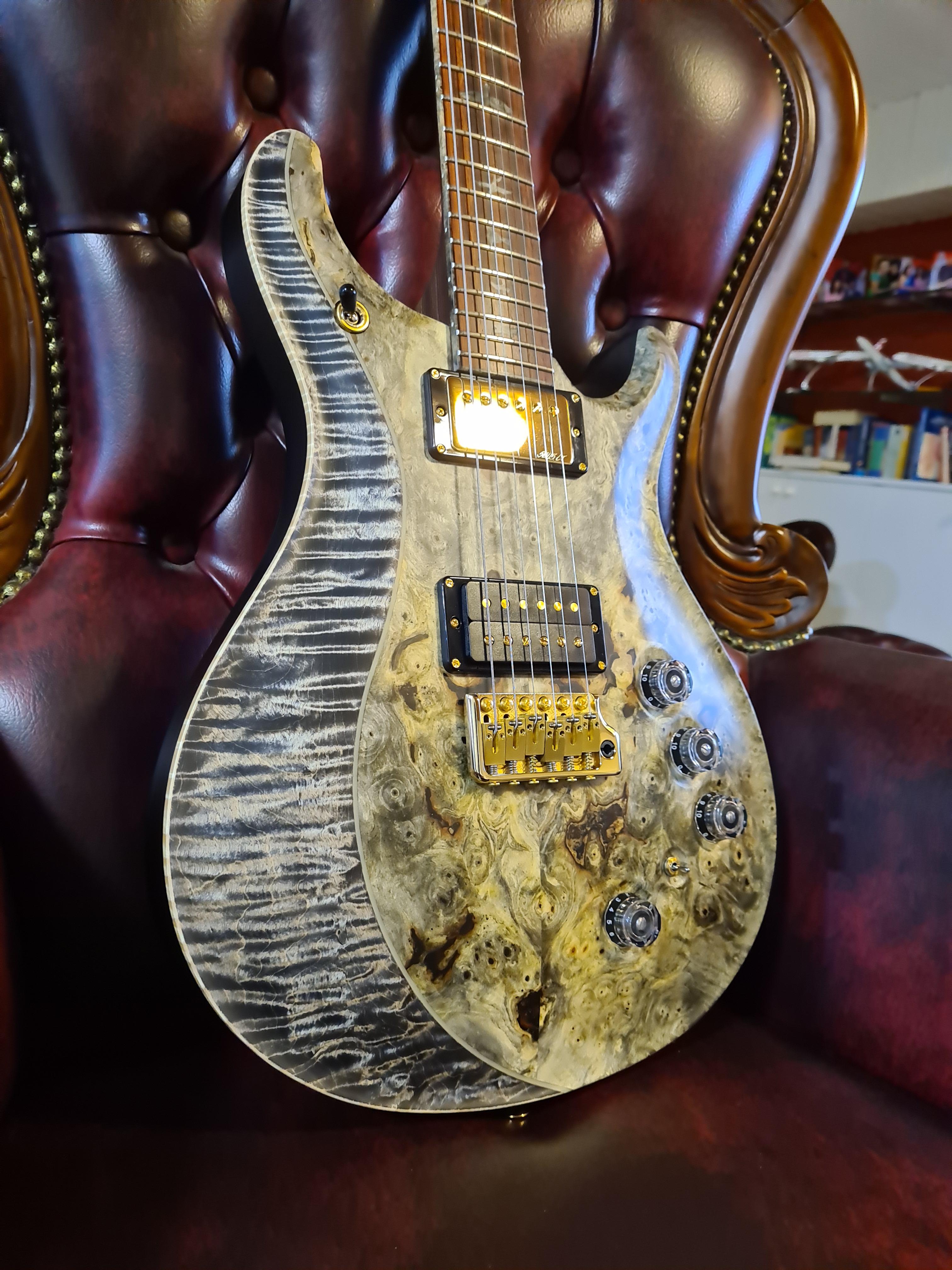 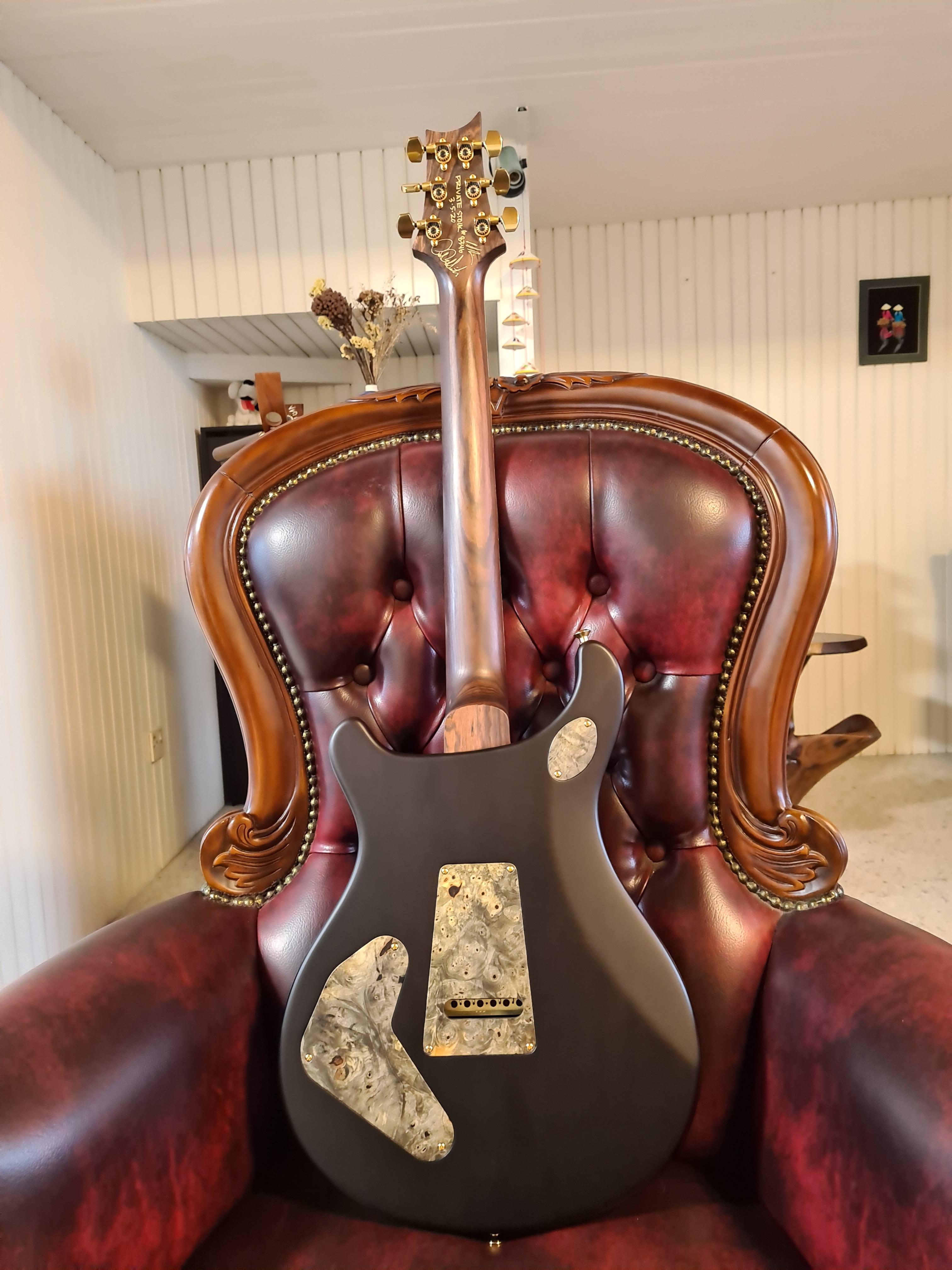 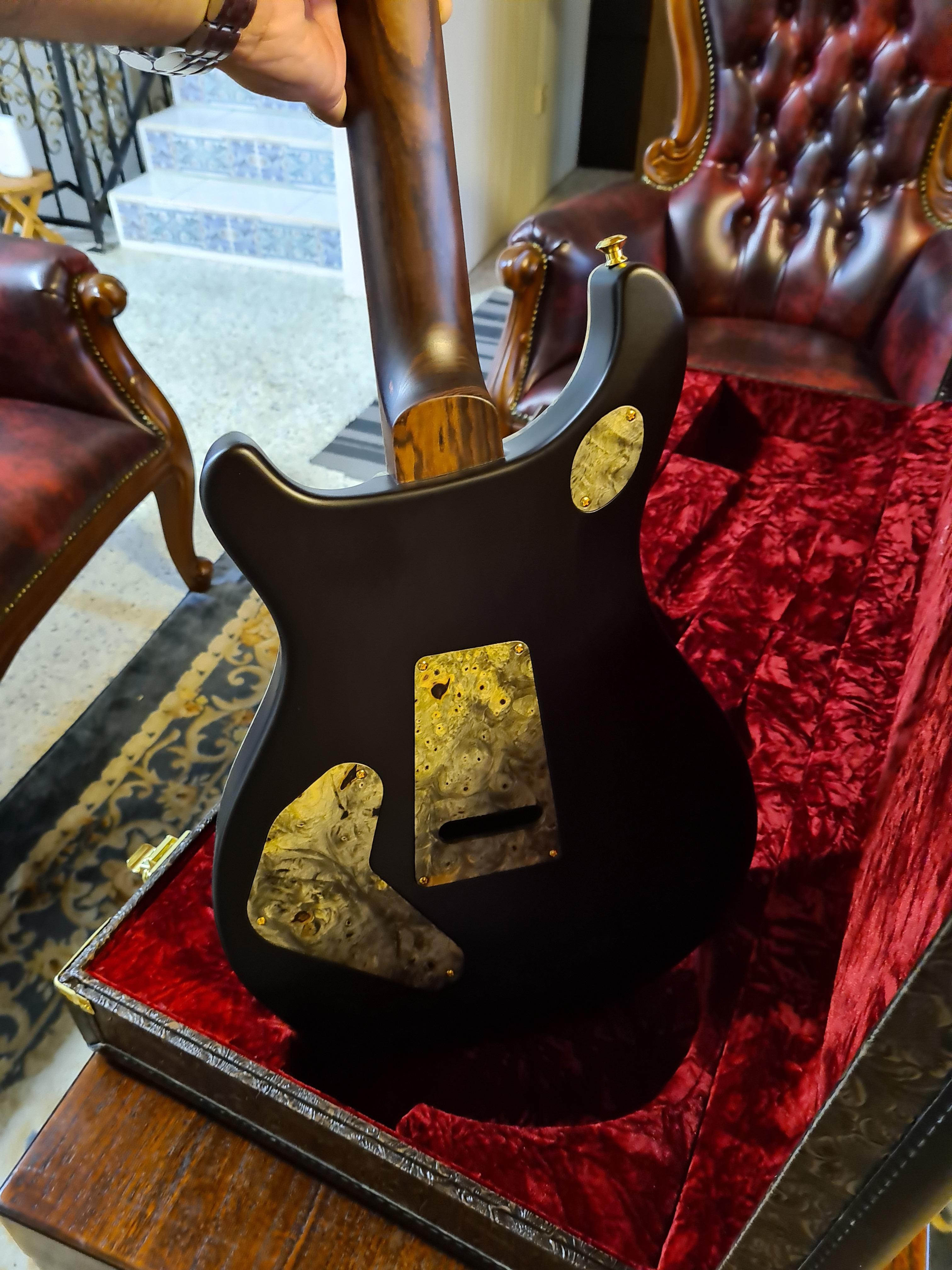 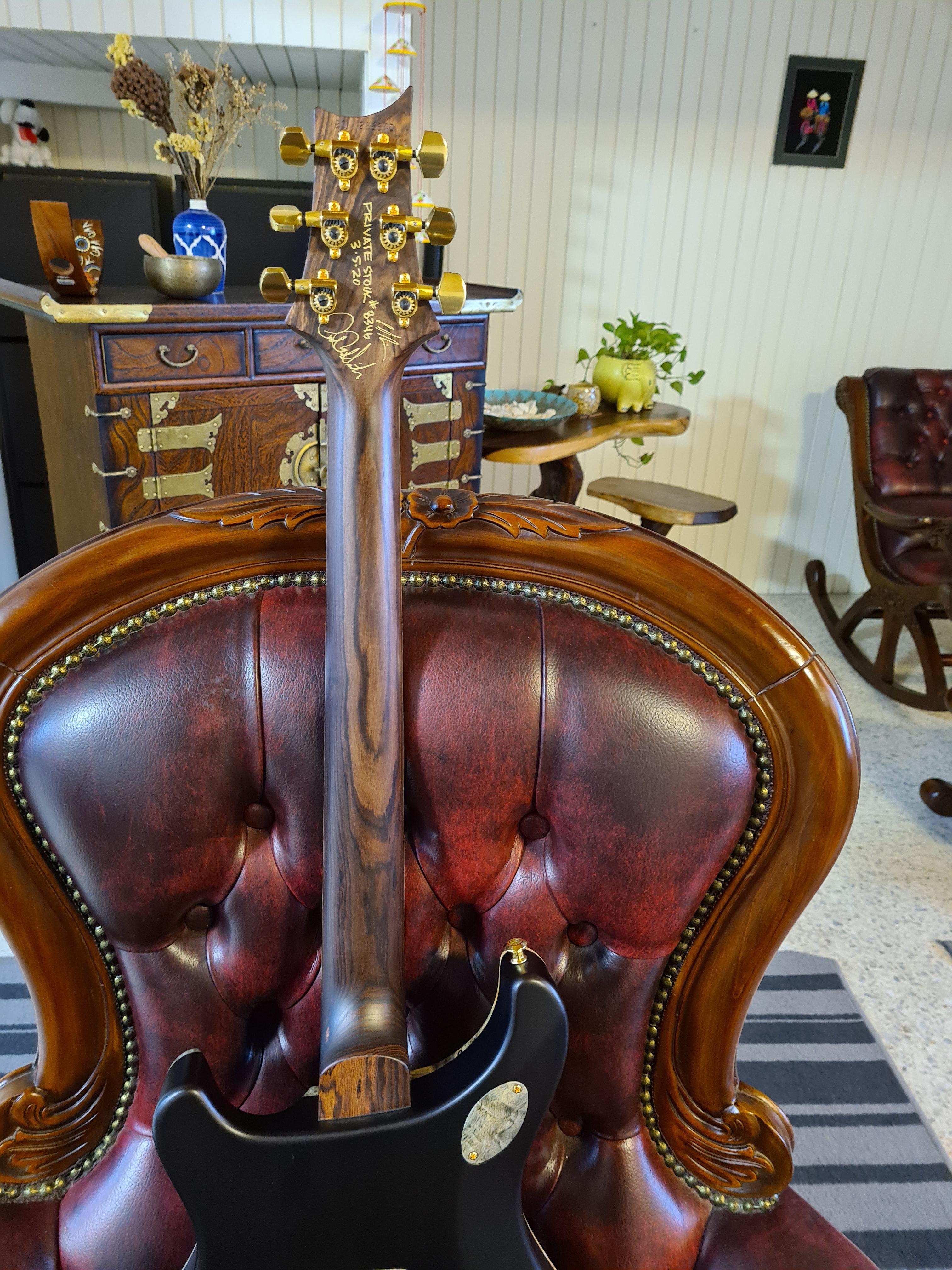 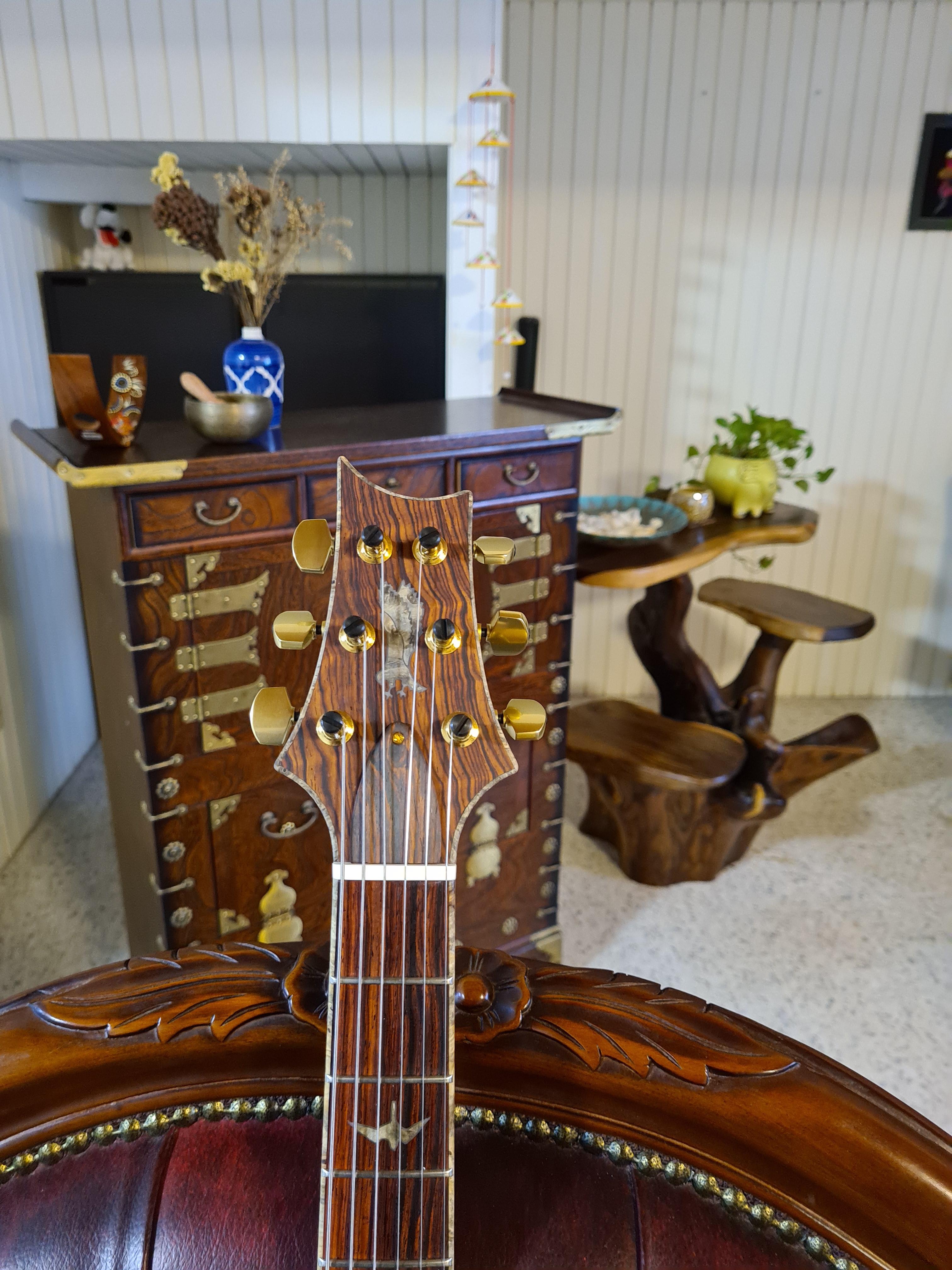 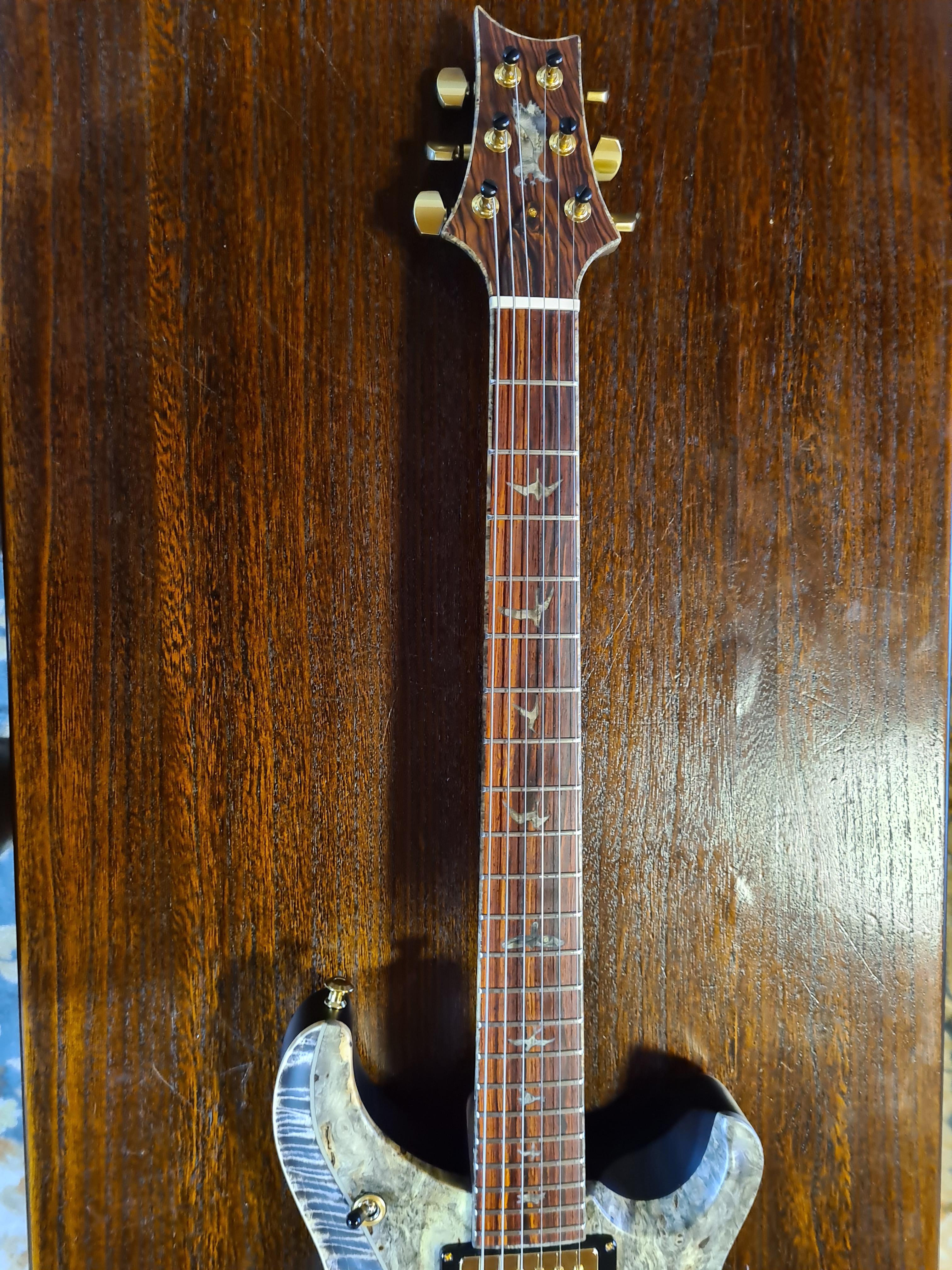 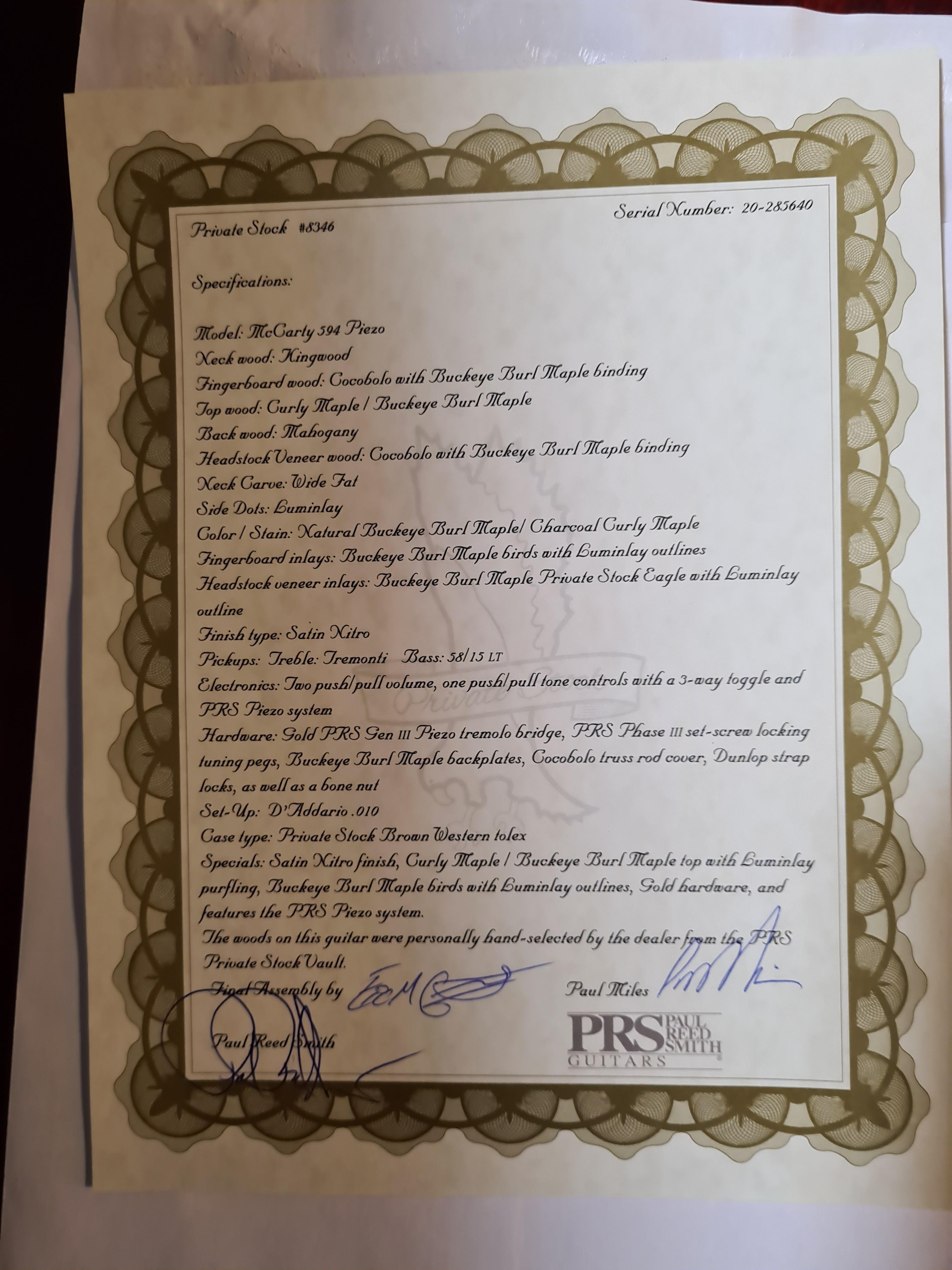 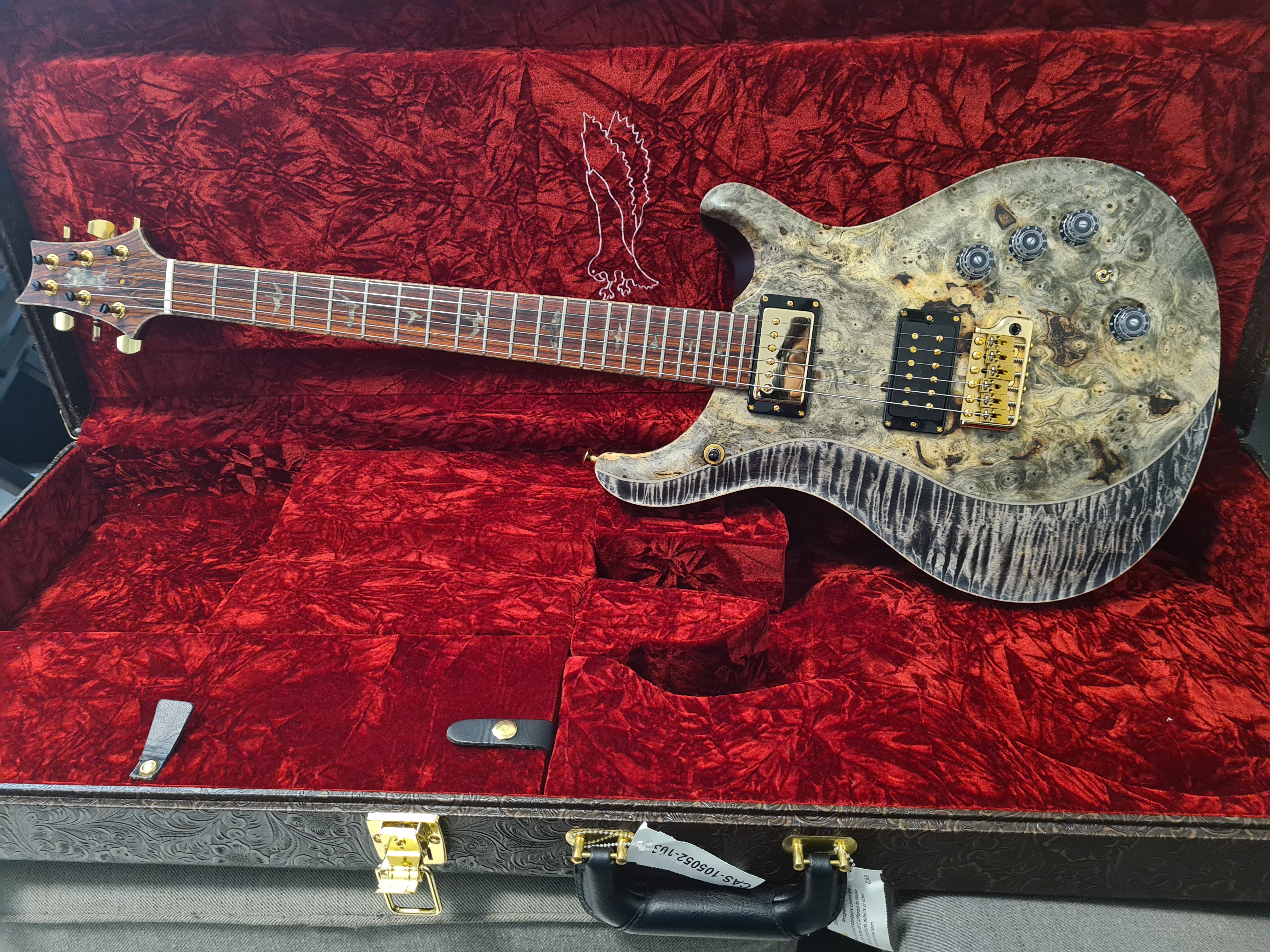 I love how much you made this your own.
Congrats and well done!

I am speechless, this is such an extraordinary looking instrument!!!! This gets my wheels turning!

Stunning build, so much detail to marvel at, congrats, enjoy it for life.

Stunning guitar. That serial number is the same as the one posted on hiendguitar this morning?

OMG, speechless, mind blown! ........... Huge congrats that is beyond special! It has EVERYTHING!

Absolutely beautiful! Great job making it yours as well!

I have seen a zillion PS builds and I must say this post is the most intriguing one I have seen. I am inspired.

Many of the choices would be the same as mine. I love how different it is than most!

Also besides my question about the 3 p/p's could you pm me with how the nut is working out? Very curious about using that with a trem. Not much information out there on that!

Uber-interesting and impressive all around. I have to say that I think the most bold choice is that back, awesome!!

vovin777 said:
Stunning guitar. That serial number is the same as the one posted on hiendguitar this morning?
Click to expand...

Yup it's the same one. I specced it through them

BrianC said:
I have seen a zillion PS builds and I must say this post is the most intriguing one I have seen. I am inspired.

Many of the choices would be the same as mine. I love how different it is than most!

This guitar is freakin unreal