NGD: Joining in on the 30th anniversary party with the Honey Killer

Fresh off the plane this morning...

So I decided that I wanted to buy a 30th Anniversary CU24 here in the UK as I do love my "local" dealers but I had a fairly strict set of requirements spec-wise (I've literally been waiting 20 years to find a CU24 that speaks to me). After some hunting I came close but nothing was quite exactly right. One major complaint that arose is that the Wood Library CU24 guitars that PRS Europe brought into this country all had the "wrong" neck carve (as in, they were all Pattern Thin) and they were all significantly more expensive than the ones done for the US dealers, even after VAT and shipping were taken into account. It's unfortunate because there were some great tops and cool wood combos, including Cocobolo fretboards which I love the look and feel of, but even if I decided that the near 50% price difference was worth it, I was never gonna bond with a Pattern Thin neck. That only left me with the standard-config Core models - regular and 10-tops, and my absolute specs (more on those in a sec) made the selection extremely limited.

So, what did I want?

1. The neck had to be Pattern Regular. This was absolutely non-negotiable.
2. It had to have a quilt top, and a good one. This probably meant that it had to be a 10-top, but I was open to a cool-looking non-10 if it had lots of 'character.' The reason for my wanting quilt is the (relative) rarity factor, the fact that my Private Stock Starla has a quilt top and wanting it to sort of fit with that sensibility, and finally the fact that LSchefman's Private Stock 30th is just about the most beautiful Custom 24 I've ever laid eyes on.

Those were the two things that I could not compromise. Other than that, I was open to colours, and I was open to the idea of a Wood Library instrument if not the price tag. (I knew Artist Packs would be out because of the quilt requirement!)

Came very close on a 10-top with standard specs here in the UK that I thought was pretty good. But, I was maybe hoping for something a little more special, since there are a lot of unique instruments being put out by PRS for this year, so I kept looking.

(This is how Doug Diamond referred to her after I stumbled across the guitar and made an enquiry. And aptly, at that, as it happens.) She is a Wood Library 30th Anniversary CU24.

The spec is pretty much bang-on. It's actually not too far off what I would do if I went Private Stock on these, at a fraction of the PS price (yet still with some of the woods).

She's the sister to a couple of other instruments here you've already seen, but of course with her own thing going on (so for some of you guys these specs will be familiar!)

Basically - it's a WL quilt 10-top (one of the best '10s' I've seen!), with a ribbon-looking mahogany back, figured birdseye maple neck (Pattern Regular, awww yeah), an African Blackwood fretboard (and headstock veneer), plus all the other sick 30th specs like 85/15s, hybrid hardware and the faux-MOP birds, but all wrapped up in a Paisley case (sweet!)

The fretboard looks and feels very much like ebony.

The neck - ohhhh my, the neck - it is SICK. I used to have an NF3, and the thing I missed the most about that instrument was the feel of the neck. It has a UV grain filler but that's it, it's otherwise kind of "unfinished" feeling and it's almost as good as a solid rosewood neck in terms of the feel in the hand, but with all the fun of maple. Doesn't hurt that it looks stunning either.

Anyway, big thanks to Doug for making a very fair deal and getting it across the pond so quickly. Bigger thanks for speccing it out so well in the first place. It's early days obviously but this guitar is imbued with SUPREME mojo.

I propose a new slogan for PRS - "It may have taken us 30 years, but we finally got it right!"

The first pic of the top is mine from today, the detail pics are from the dealer because they're just better than I can do on short notice... 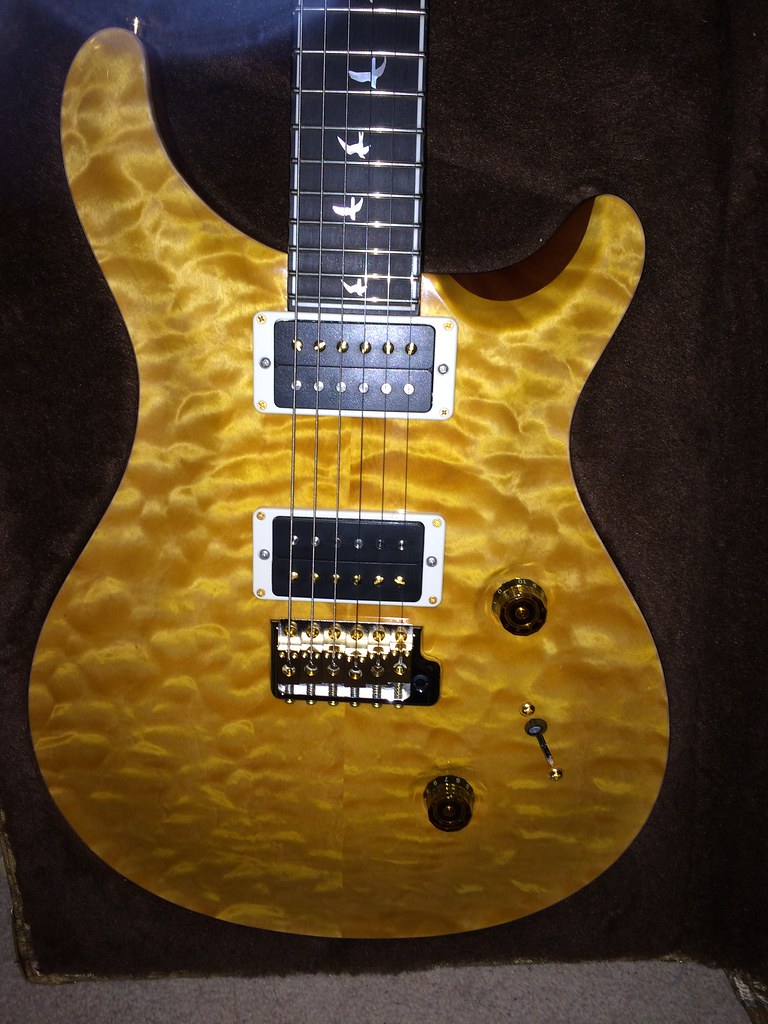 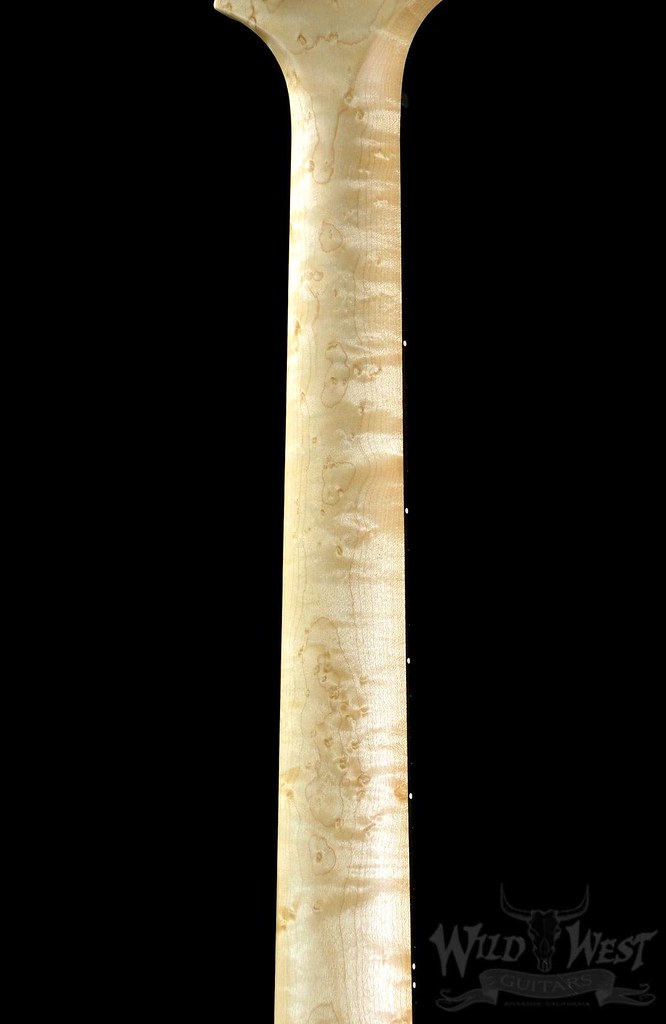 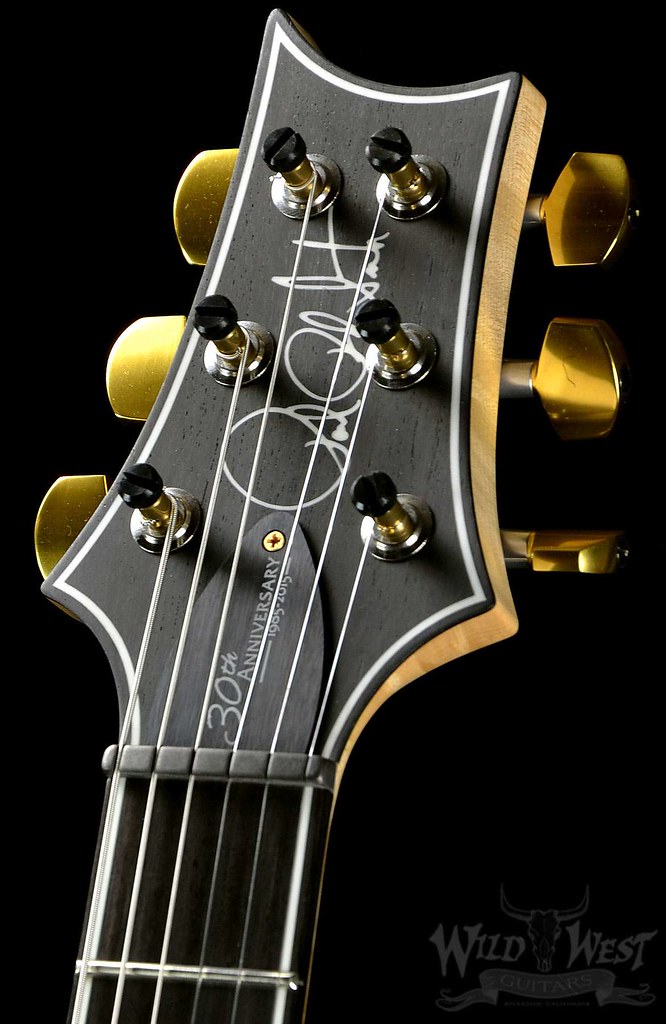 What the gravy and cheese!!!!

What? I get a title?

That is an awesome quilt! Outstanding! (Sorry to repeat Bluesboy998's line.) Nice wood selections - something to look for in the future for my own needs...

And a great story, to boot!

Off the chart, and IMHO every bit as stunning as my PS version! Plus that neck...Just killer. Enjoy it!

Awesome, I bought it's bench mate in Blood Orange - you'll love it.

Another lovely. Play the hellout of it!

Not so new member

You hit a "home run" on this one.! Congrats what a beauty.

Wild West says they got 5 guitars in this wood library run with quilt tops, birdseye necks and African Blackwood boards. Your honey, my blood orange, a killer charcoal (which has sold) a whale blue and a vintage sunburst. I don't know if the last two have already sold, or if they haven't gotten them in yet. I sure would like to get a look at the last two.

Here is your guitar's twin brother if you're interested:
http://prsguitars.com/forum/showthr...range-Quilt-CU24-30th-and-then-there-were-two!

Stunning. I'm with you on the quilt maple top. It almost always beats out the appearance of flamed tops.

I'll say this about my 30th Anniversary CU24 - it's become my go-to, and I'm using it for all kinds of projects. It's nice that they're pretty, but they are just so great to play, especially with these new pickups.