Apparently published in October, but I just read about it in an e-mail from Guitar Player. Maybe it's just been updated. Either way, I'm probably going to pick it up. 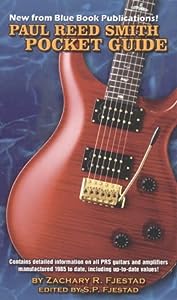 I should get one, too.

As a side comment, at their website you can either buy the book for $14.95, or subscribe for some period of time for the same price. If you are just interested in the price guide for a single model "family" (e.g., all of the Customs), a single-model download is $2.95.

This isn't a slant against the sellers... I can't help but wonder how accurate their data might be.

Was anyone here involved with the creation of that book? Even hear about it?

I'm looking forward to seeing it.

Was anyone here involved with the creation of that book? Even hear about it?

I'm looking forward to seeing it.
Click to expand...

I am highly suspicious. Printed price guides are pretty useless anyway. It will be out of date by the time it is printed.

I didn't realize it was just a price guide. I was hoping it would be a PRS book.

Should have qualified - I haven't actually seen the book. It sounds primarily like a price guide, but it also sounds like it has model info.

Blue Book Publications is excited to announce its newest reference and value guide in an all-new convenient pocket-sized layout! Dedicated to only PRS guitars and amps, the Paul Reed Smith Pocket Guide contains detailed specifications for everything Paul Reed Smith as well as used values. Features:

• Contains every factory cataloged Paul Reed Smith electric guitar, acoustic guitar, bass and guitar amplifier produced since 1985
• Retail pricing for all currently produced guitars including the 100%/New price indicating what you should expect to pay for a new PRS
• Up to seven different used values for each model based on the overall condition of the guitar/amp
• All PRS serialization to accurately date a PRS instrument

All major series are included: the Standard Series, Custom Series, McCarty Series, Singlecut Series, and the Santana Series. It also covers the entry-level Korean-built SE Series up through the highly elaborate Dragon Series. Other bonuses include a lifetime chronology of Paul Reed Smith and an interview with the man himself.

The Paul Reed Smith Pocket Guide has an MSRP of $14.95 and is available through major bookstores, music stores, and directly through our website or by phone. This book is a must-have for any Paul Reed Smith enthusiast, collector, or dealer!
Click to expand...