I recently sold my recording studio, and decided to use some of those funds to explore some dream guitars I never had a chance to own.

I can’t keep all these guitars long term (right?), but for now, I have fallen deep into a PRS rabbit hole, and don’t want to get out!

I can now see why people have been so passionate about these guitars. Paul is an amazing guy and his passion for quality really comes through the whole company and product line.

I’m currently a very happy owner of a Silver Sky, a Custom 24, and a couple of McCartys.

Welcome Proxy! Congrats on your rabbit hole exploration! I am sure the Caterpillar has some sage advice for you!! Need pix though, otherwise we can not live the dream along with you!!!

Moondog Wily said:
Welcome Proxy! Congrats on your rabbit hole exploration! I am sure the Caterpillar has some sage advice for you!! Need pix though, otherwise we can not live the dream along with you!!!

Will do. I think I need to post a bit more before they let me have an image link but will soon.

DISTORT6 said:
Welcome, proxy!
We’ll try not to hold the whole TGP thing against you.
Post up some pics when you can and don’t forget to make one your avatar.
Click to expand...

Haha. Quite a lot of PRS talk there too but figured it was time to go to the source.

This is the 24. Stunning wood they used on this one. Looks more zebra in photos than in real life. proxy said:
Will do. I think I need to post a bit more before they let me have an image link but will soon.
Click to expand...

Just keep replying here, I will reply back, and you will be there in lickity split!

Welcome, congratulations those are both stunning!

Most EXCELLENT Dude! I especially like the CU24 top (like most would)!!! Happy pickin' and be sure to start a NGD (New Guitar Day) thread when you get your Silver Sky (but don't post until you have photos ;~)))!

Finally figured out how to post pics! Here's the PRS 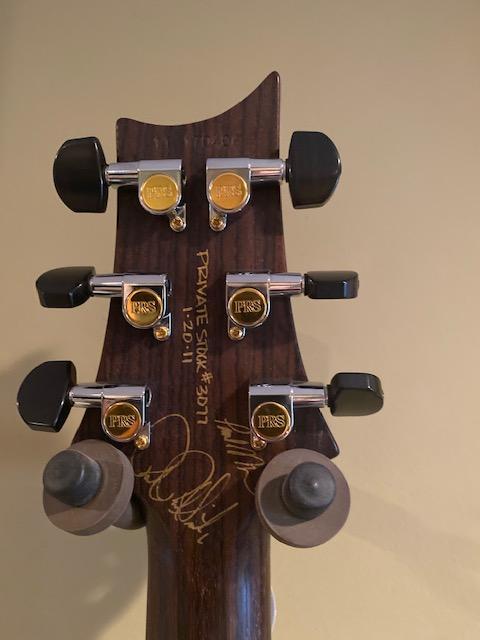 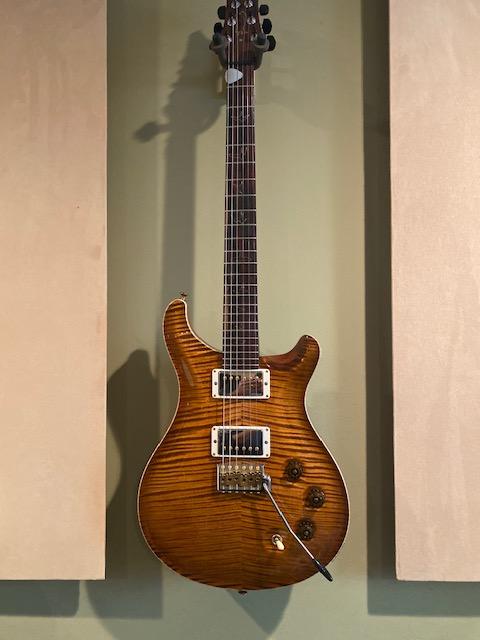 PRSWILL said:
Finally figured out how to post pics! Here's the PRS

Congrats on conquering the picture puzzle here at the PRS parade! And welcome! Pix always good!!

Maybe should have introduced myself before posting a thread previous to this about my tone pot... I currently own and have since I was 16 a '93 PRS
CE 24. It is my only electric at the time.

I had a lot of gear stolen in Raleigh,NC that was never recovered. Luckily, I did have my PRS with me.

Lost all my production gear & my personal guitar rig and effects units. Mics, cables, Computer DAW, ADAT pre-amp, so on and so forth.

For a while after, I was running my PRS into a M-Audio Black Box then out to a tape adapter into a commercial stereo tape deck as an amp.
A huge step down from what was my favorite amp that I've ever owned; A Fender Deluxe Reverb II.

After struggling to find any work (as a guitarist or in the studio), I went back to school for music performance. I only got an associates of fine-arts, music performance degree but, I learned SO much and have a much better grasp on reading & where any given note on the staff lays on the fret-board.

I was pushed more in a jazz direction during school. Never got "Giant Steps" at tempo but I do know to play and solo over it.
How did I find out about Paul Reed Smith guitars? The other guitarist in my first band had just bought a Custom 22 and I played it and loved it.
The neck was a little thicker than I preferred but, It sounded and played great.

When I saw an ad for a used '93 CE 24 in a local head-shop, I called inquiring about. The guy was a huge Rush fan and for whatever reason, preferred to play a Gibson SG. So, I bought it from him when I was 16. I've had various other guitars, but my '93 CE 24 has always been my baby. My go to.

When I'm able to save a little more money, I'll probably purchase an SE 24 as a backup.

When I went back to school I had a few achievements. I arranged Dave Brubeck Quartet - "Blue Rondo a la Turk" for 4 part guitar. We did play that one in concert. I also arranged for small orchestra with some help from the director of the orchestra. I arranged two original pieces that were never played during concert. I did however transcribe and arrange Micheal Jackson - "Don't Stop 'Till You Get Enough" and it was played in concert.

I became the unofficial copyist for the orchestra's director because I learned Sibelius very quickly and well.

I met the other guitarist in my band, Jon, in school during guitar ensemble. I made a Zappa joke about another guy in the ensemble and we began talking and playing together.

Hmmm... I've always been a bit of a theory nerd since I took it back in High School.

Anyone want to explain my fascination with this chord progression? Please feel free to elaborate.


Ne way. Not gonna plug my band or soundcloud,ect.

Welcome to the forum Paul.
X

Guitargonish said:
It's only polite to introduce ones self

And so I will.
I'll leave the name and job stuff for the sig.
I bought my first PRS used in 1988 or so, a Std24. I had heard of these, and got lucky enough to find one. Wish I still had it, but I sold it to buy a Super 400...
I play Klein guitars a lot. I have three. I know Lorenzo German pretty well. (Please, if you're one of his former customers, don't ask me to help you get your guitar that you ordered way back there, I have one on order too.). I try to keep my GAS disease under control, but guitars are tax write offs for me, so it's pretty easy to justify them.
After years of looking at them again, I bought a Hollowbody Spruce from Brian Meader when he was still at Washington Music Center near DC, three years ago. Then I bought a Studio from him last year. I love that too. It sounds different, and I like that. I want a P22.
I play jazz. Not much rock and roll. But I do like to get a variety of sounds from a guitar, and these do it.
I really admire PRSh's drive to make a really good instrument. I've never met him, but I'd like to. He seems to be just a bit obsessed about making things as good as he can, and I really like that.
My job is in the Maritime provinces of Canada, and there's not much available. I'd like to try one of the new amps, but there aren't any near me there.
Guitars are more fun than just about anything else.
I'm in.
Click to expand...

I’m new to PRS but want something around $3k

Hey XC106, welcome to the forum!! My recommendation (and I am low man who is not even on the totem pole) would be either a used Hollowbody or a used CU24. Everything is awesome from this company, but those are the two that I have had my hands on the most, so it is what I am going to recommend. A lot depends on what style you are looking to play, what other guitars you like the sound of, etc. I am sure you will get plenty of responses here! When you do get something, be sure to post pix!!! We love the six string pix here!!!

Hey Jakles, welcome! Be sure to post some pix of your axes! If you have any trouble with that, @CandidPicker, myself and many others will help you on that topic!

Nice!
Right to the point.
Welcome.

You can get a LOT of different PRS guitars in that range. Used- almost any Custom 22/24 ( non- 10 ten top for sure) and maybe even a 10. Go play a few- figure out which neck pattern you like best and whether you want a fixed bridge/ trem system, and number of frets, then you can start filtering down to the pick-ups, finish, etc. Have fun!!

Howdy, new user and NGD today for me, but looks like I'll need to make 3 posts before I can share some photos with you all

I've played guitar (not particularly well) for around 25 years but had a bit of a hiatus when I lost interest for a few years and made the mistake of selling all my music gear (never again!). Started getting back into playing, writing and recording over the last year or so and back on the tone quest!

I previously bought a second hand 2006 PRS Swamp Ash Special in gloss black finish, but didn't really click with it unfortunately. I've always lusted after the "pretty" PRS guitars, so the gloss black wasn't quite doing it for.

Have mainly been a strat player (recently purchased a HSS Fender American Ultra in Texas Tea that I love ) but have been lusting after that sweet LP tone...but never really liked LP's. There was a LP Modern in a local music shop I'd played a few times and kinda liked, but started looking into other options...and discovered the PRS McCarty 594, and proceeded to go pretty deep down that rabbit hole.

So this is my first time purchasing a brand new PRS - a 2020 McCarty 594 10 Top in Orange Tiger. It's been a bit of saga to get here (I'll go into that more when I can post images and give a bit more of the story), but I'm certianly happy now.
You must log in or register to reply here.
Share:
Facebook Twitter Reddit Pinterest Tumblr WhatsApp Email Share Link
Top