Bought a Mann bridge for my S2 Standard 22. It is amazing. No wonder that it is priced this much.

I already installed it without strings. I already put on the springs. I followed the video instructions and on paper. But, I have a question... there's a clicking sound at the 1st string close to th trem arm when I dip it. Is that normal if it is not strung up yet? 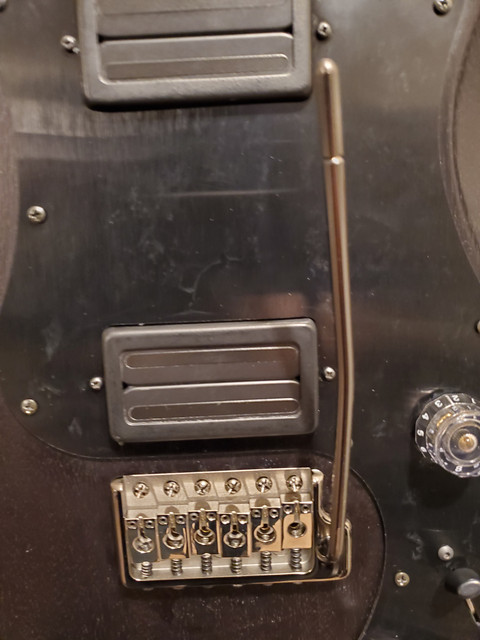 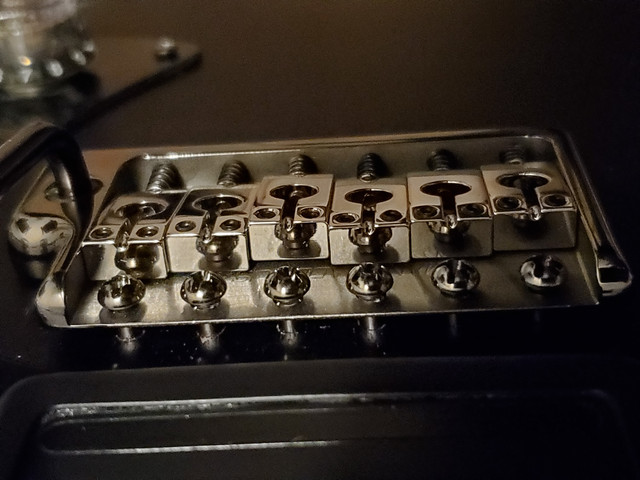 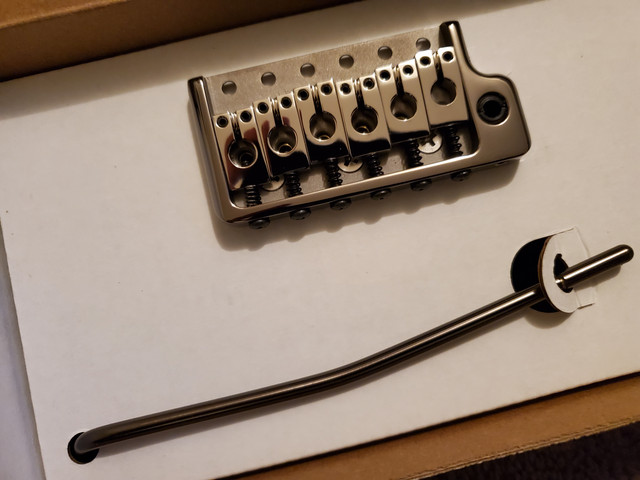 Sometimes you pay a lot and are underwhelmed.

Sometimes you pay a lot, and you get what you pay for.

If you are confident you set up the screw heights correctly according to that video on it, I wouldn't worry.

When you get the strings on and it's floating in balanced tension everything should line perfectly.

When there are no strings to provide counter tension to the springs, the knife edge isn't held into the notches so you will get that slipping movement when trying to push against the tension.

Probably best to not do that too much before the strings are on.

It's a little hard to tell from that photo, but it looks like the screw under the 1st string is a little closer to the bridge plate than the others. It might need to be raised a hair. You want every screw at exactly the right height to line its notch up with the front edge of the screw hole. Pay no attention to any curvature of the guitar's top.

Don’t worry about anything until you get it strung up

frankencat said:
So???? Which bridge did you get? How's it play?

It's from Mann in black nickel with plain nickel saddles. It's not as black as I wanted, in fact there's almost no difference with the shiny plain nickel as you can see in the pic. But, the build quality is incredible!

I opted for the PRS/Mann bridge in nickel black but requested for plain nickel saddles. It's the one with a brass block.
G

I have been considering doing the same thing...well a little different actually.

I have the S2 Cust 24 (I really wish that I the Cust 22 but oh well) and will be changing bridge pup (from stock to Duncan P-rail) soon. I have glanced at the Mann bridges...I want piezo saddles though.
If my plan comes to fruition I will have 1 guitar that does everything that I need and more:
-Piezo saddles=acoustic
-Duncan P-rails (both positions) = humbuckers, single coil a la Strat and P-90. I'll use the Duncan triple shots to switch the P rails and (hopefully) use the push-pull tone control to switch between Duncans and piezo

Back to the Mann bridges (sorry, I didn't mean to change the subject) has anyone used their short (David Gilmour-ish) trem arm? I'll probably switch to shorter arm as I'm not a big trem user.

BTW-I am new here (1st post) so my SINCEREST apology if I committed a Faux Pas.

Gary Montgomery said:
Back to the Mann bridges (sorry, I didn't mean to change the subject) has anyone used their short (David Gilmour-ish) trem arm? I'll probably switch to shorter arm as I'm not a big trem user.
Click to expand...

The trem arm that came with my Mann bridge was shorter than the original. I'm not sure if it is what you are pertaining to. But, I actually don't like it. I feel like I don't have much leverage or not much to hold on.
G

littlebadboy said:
The trem arm that came with my Mann bridge was shorter than the original. I'm not sure if it is what you are pertaining to. But, I actually don't like it. I feel like I don't have much leverage or not much to hold on.
Click to expand...

Chances are your arm is what I was referring to in my post; I would (probably) go even shorter.

As I stated, I'm not much of a tremolo user. I use it much like David Gilmour; usually just a touch of vibrato on a note or two (LOL please note that I'm stating that I use it LIKE David Gilmour...NOT "as well as.")

The only song that I play that sounds like it has a lot of tremolo is "Over the Mountain" (RIP Randy). However, I play it LIKE (note "LIKE" vs "as well as" again lol) Randy did in the videos that I have seen...he pulled the string off of the fretboard a really tugged it to get the really wide vibrato effect. He usually used the white Jackson on that song which has a Fender type tremolo (I have NEVER seen a pic with RR playing a guitar with a Floyd Rose), so AFAIK that's about the only way to pull those notes as sharp as they go in THAT part of the song. He did use the tremolo on the "much less wide (??)" part of the solo.

Anyway, what were you talking about? LOL

You're most likely correct that your new arm is what/very close to the shorter arm that I mentioned.

Another thing about Mann bridges: you can (almost?) SEE their quality in pics.

Gary Montgomery said:
As I stated, I'm not much of a tremolo user.
Click to expand...

Gary Montgomery said:
Another thing about Mann bridges: you can (almost?) SEE their quality in pics.
Click to expand...

I was doubting as to why spend $300 on a bridge when I can get a knock off for $50+ or a Babicz and Wudtone for half. I took a leap of faith on the Mann because they've been insisting here. I doubted, moreover because I'm poor. But when it arrived, I gasped at the beauty of it alone. I wished it was blacker, but it is just beautiful. It's not even the higher end NOS2000!
G

Cool! I'd be scared that I would break something...mainly myself!
In all seriousness, I'm physically unable to do that!

littlebadboy said:
Well... I was hoping to be able to do this...

I saw her on the "Gunslinger" (the actual title is "Hired Guns." Sorry for any confusion that my mistake caused) documentary. She (and the documentary) were really REALLY good!
Last edited: Feb 9, 2020

Gary Montgomery said:
I saw her on the "Gunslinger" documentary. She (and the documentary) were really REALLY good!
Click to expand...

She’s the real deal. And as nice a person as a guitar player. And she’s a straight shooter. At one Q&A I was at, someone asked her why she would use a modeling setup on her solo tour. And it was asked with an attitude. She very pointedly explained carriage costs, tour expenses, and that the band liked to eat, too, and that money had to come from somewhere.

I’ll have to look for that doc.
G

I am a BIG fan of *tubes, but if I was a touring musician making DECENT money I'd be looking at the added expense of tube amps (vs SS/modeling amps) too. I'd PROBABLY opt for tubes in the studio and modeling on the stage.
I'm shopping for a SMALL tube amp now. I love small Fender tube amps! Is it the Champ 600 that's the reissue of the original?
I have a Hot Rod Deville, but it's simply too heavy (I have degenerative disc disease) for me.
I was mistaken about title of the documentary; it's "Hired Gun" not "Gunslinger." I'm not sure where I got "Gunslinger." I THINK that one or more of the people referred to themselves as Gunslingers. Sorry for any confusion!
It's on Amazon Prime (free with Prime) and on YouTube (rental) if that helps, and I'm sure that you can find it on Kodi.
There are some real horror stories about working for some of the stars.I won't mention names, but there are two big stars in particular that stood out as real A-holes.
Their musicians quit the band (one to do voice acting for burger commercials): After a worldwide tour he'd asked for some way to earn more money [the hired players could not afford hotel rooms (they slept on the tour bus) on their per diem during the (>20 million records sold) band's tour] and was SERIOUSLY given the phone number of a local pizza delivery place.
There are some really GREAT star stories too; I don't mind mentioning their names...I think that Hillary Duff was one who was reported to be GREAT.
Anyway, "Hired Guns" is a "must see" IMO.
Thanks

Gary Montgomery said:
Anyway, "Hired Guns" is a "must see" IMO.
Thanks
Click to expand...