I took delivery of my first PRS this last Saturday. Nice guitar, uneven burst, but the neck is fantastic! Before I go any further let me give you some background. You can skip this and go to my thoughts below.

I have been a Strat guy most my life, getting a Squire in middle school and a SuperStrat in high school. I stopped playing for 20+ years then decided to hit it again when my daughter was born grabbing a low cost acoustic.

Then I decided I wanted an electric but felt that since I would only need one guitar (LOL) I wanted one that could get me the most tones. So I picked up an Epiphone ES335 Pro in Cherry with split coils about 4 years ago. It is a sweet guitar, well built, paint is tight on it and I could play everything from jazz to rock to rockabilly. But, what I have learned since then is that there is really no such thing as "one guitar".

So, a couple years ago I picked up a Player Strat with an Ebony fret board off Amazon from Chicago Music Exchange. I frankly was a little unsure about getting a guitar, site unseen, from Amazon but had a bunch of gift cards that I could put toward it. When it came in I was pleasantly surprised. It was nearly perfect out of the box. I only had to do minor intonation work and dress the frets. After my experience with both the Epiphone and Player Strat being such quality guitars I felt it safe to continue with my high-low cost guitar purchase. The quality of that Strat made me comfortable buying guitars on line. (Seriously, I've played American Strats and can't tell the difference.)

Then about a year or so later I grabbed a Player Tele with a maple fretboard, also off Amazon, from Amazon. The first one came in with a paint chip which I sent back but the second one was, again, in nearly perfect shape. I did have to enlist my local luthier (Colfax Guitar Shop) to help me with the intonation but now that has become my favorite guitar.

I really have liked all three of my "player" level guitars and will continue this pursuit until I feel my playing has gotten good enough to deserve a McCarty 594, or or Custom Shop Tele/Strat.


After waiting over a month for the guitar to arrive at Sweetwater, and then get shipped to me, I have a brand new SE245! I'm very excited but would like to get some folks opinions on the finish.

Firstly, the guitar is really well built, the neck is fantastic and the frets are perfect. Both my Fender Player guitars and Epiphone needed the fret ends dressed after I bought them. The pickups are great as well. I’m very happy with it save for the burst finish.

I waited a little over a month for the guitar and got a call from Sweetwater that only two came in and the first was already allocated to someone who was before me. They were unsure when the guitar I ordered would come in the first place and didn’t expect any more until next May.

When the sales guy sent me the photos, I was honestly a little disappointed. The finish along the edges is really uneven. All the examples of the Antique Burst on the the SE 245 I had seen on the interwebs had beautiful burst finishes. I think some of the unevenness on the guitar is due to the top being that of a lower end PRS and the grain accepting the paint differently which is OK. But some of it really looks as though whoever did it went a little heavy on the sides in a few places.

Regardless, I was OK with buying it as my primary concern was tone and playability and I still like the Antique Burst over the darker one.

Now that I have it in hand, I really do love it. They did end up getting 4 more in about a week later all with the uneven finish but much nicer tops, but mine had already shipped. I decided to wait until mine came in and see how it plays. The verdict: mine plays and sounds wonderful and looks pretty good. I don’t want to send it back and get a moderately better looking guitar but it not playing as nice as this one. Besides the uneven finish gives it some character.

So what do you all think? Is this a common issue with the lower end PRS burst guitars having this problem? Or am I out of line? Is it just the grain on the edges causing the darker paint?

Anyway, I am looking forward to many years with this guitar and am excited to no longer being a thirsty lurker on this forum.

PS. I am trying to embed the photo but nothing seems to be working. There is a link above as well as here

You really need a photo hosting site like Imgur.com. I tried your link, but it requires a password. A picture is worth a thousand words.

However, since SEs are using veneer tops, I’m guessing the wood quality is not the problem. I’d guess it’s the painter. Hard to say without a photo.

11top said:
You really need a photo hosting site like Imgur.com. I tried your link, but it requires a password. A picture is worth a thousand words.

However, since SEs are using veneer tops, I’m guessing the wood quality is not the problem. I’d guess it’s the painter. Hard to say without a photo.
Click to expand...

Yea, I tried embedding with Imgur but kept gettin the "?" then went with Google so I could do an album. I have switched the links to Imgur now, those should work, but the embed still gives me a question mark. 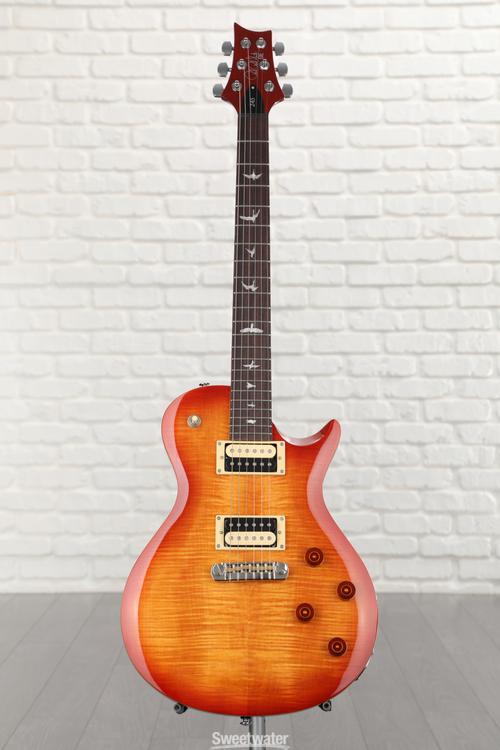 How'd you do that? You're a wizard! Thanks!

GratefulDean said:
How'd you do that? You're a wizard! Thanks!
Click to expand...

You have to copy the actual address of the image itself and paste it into the pop up box that comes up when you click the photograph icon on here. If you try to paste it as a "link" instead of the "address" it won't come up.

Looks pretty normal to me for an SE245.

They're all veneers unless I'm mistaken, so not sure you'd see much difference between tops anyway.

It it feels good, and plays good, and still looks pretty good, I'd say you're good to go.

Yea, I love it. It’s hanging on my wall by my bed looking pretty badass right now. I need to CTFO…
H

My logical brain says that should be no big deal, and yeah, the lower bout has red on the low-E-string side but whatever, when you're playing that's largely blocked by your hand and arm anyway.

But I also know there's a visceral thing that happens when we look at our guitars, and if you're going to look at the guitar and constantly think "eh" because of the finish, then you should send it back.

I think it looks fine. I see the unevenness, and I don't think it would bother me. But ... I'm not the one buying the guitar.

Edit: I looked at the Sweetwater website, and it looks like there's some lack of evenness pretty commonly across the line. I'm not sure you'll do better if you send it back.

I'll admit I didn't read the "wall of text". I've only played a handful and haven't seriously shopped the se245, but I'd call the uneven finish part of it. It's pretty clear in the Sweetwater photos too.. dang it, I can't say that without reading the "wall of text" BRB lol..

Ok,, read it! Man, if you knew it was like that I'd keep it. I'm not one to return guitars that I knew something going into it. I always remind myself that new guitar that arrived to me will arrive used to the next guy. That's me...

If it bothers you, return it. If you can like it, keep it. Just do it sooner than later is my .02. I think it looks cool as is, regardless if it's normal or not, but it’s not my guitar. I'll add one more penny.. there's very few bad PRS coming from the dealers. Sure one happens but man is that percentage low low low.

Good luck on whatever you decide!
A

That 245 looks awesome! If it plays good then I'd keep it.

I was recently feeling a new guitar Jones and thinking I'd sell my 245. Took it out and played it...nope it stays!

Wood doesn't always absorb stain evenly, but that's one of the beauties of a natural material like wood - each piece is its own thing.

I think the guitar looks great.

It’s a good looking guitar, though I agree the bursting is uneven… I’d guess more the painter than the wood. But it’s “evenly uneven” so it doesn’t look bad. If it’s a good player, I’d be fine with it. I’ve seen some great SE finishes, while some are less so. Bursts are harder to do well than it appears. Though he was referring to US made models, I’ve heard Paul say that they can tell who sprayed a guitar by the burst.

Seriously, though, it’s minor and is still a nice looking instrument.
S

Looks nice to me and I would not have an issue with it. Some tops are completely washed out on some sides. Looks better than a lot of S2 tops including one of mine. But you are the owner and have to decide that.