do you normally play at home/practice? Do you know? I mean actually know? I got the idea recently to spring for a cheap decibel meter (BAFX on Amazon for $18) and find out my own self. The unit arrived yesterday and while playing today, I set the meter on a stool just in front of where I stand which is around 8' in front of the amp. I then set my amp(s) to a level that I felt was pretty open and full with the power section breathing but wasn't so loud that I was "uncomfortable." I liked the tone right about....there.

The two amps I was using today were 40w and 50w respectively and this is just one day and one trial. Sometimes I play with less volume and...yep...sometimes with more. I also have a 5w amp that I play more frequently and it takes less volume to get to the sweet spot.

Obviously, occupational therapists would probably say that continuous exposure to 105db ain't good for me. But...it isn't continuous (if I practiced more it might be!) and, hey, it's rock and roll after all. But, in all seriousness, I actually do at least want to know what 90, 100, 110, 120db really sounds like. And then make my decisions about how much sound pressure I want to expose myself to at any given time. 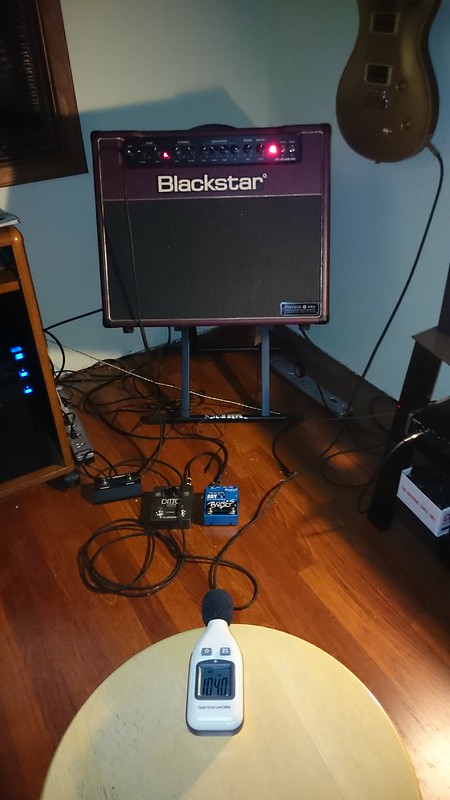 Since I don't play out I went SS because of volume vs tone.

There are dB apps for iOS and android devices....

Gonna check some out. PRSAK has me curious. 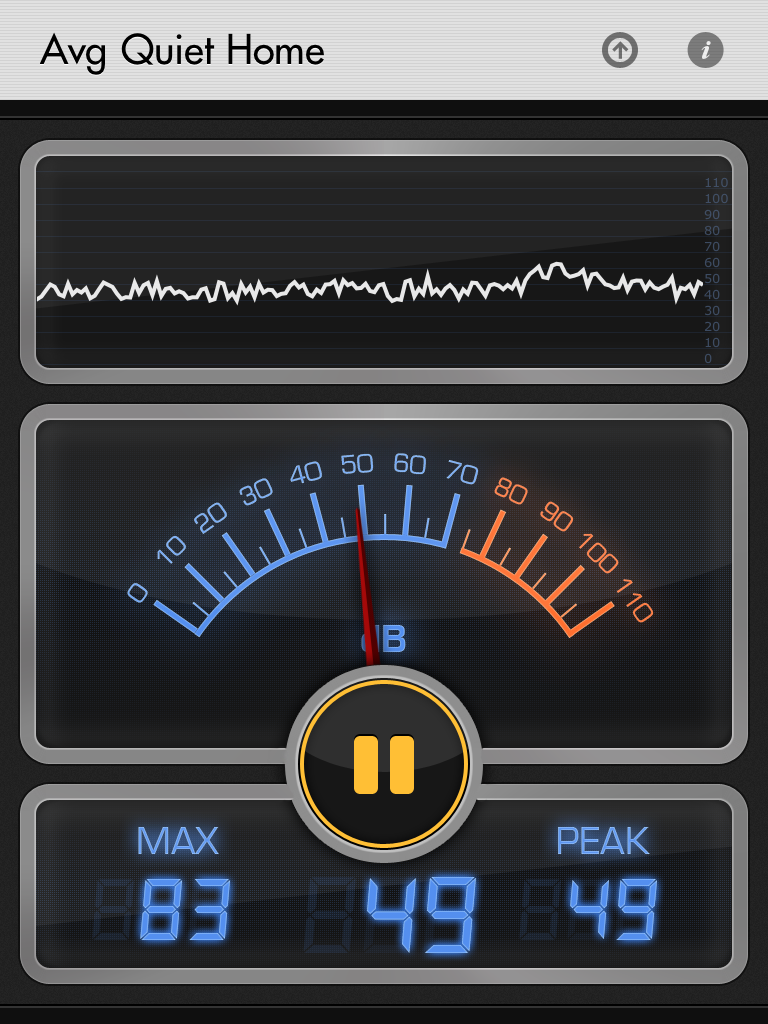 Just got it thanks.

I usually practice for short amounts of time, around 95-100 db according to my decibel meter. Any longer than a half hour or so, I turn it down. For recording at higher db levels I use headphones, and I have custom earplugs for live shows.

I work and mix between 75-85 db generally. That can be a several hours, though I take breaks.

It's all a matter of the length of time you are exposed to high decibels.

OSHA has a chart, here it is:

Of course there is an App for that. Doh! I downloaded one for Android this morning and put my phone and the decibel meter I bought side by side. They were as much as 10db off with the phone reading higher.

Continued the experiment with my 5w amp and, as expected, I like what I’m hearing at an indicated 95db. Turned it down to an indicated 85db and, yeah, fine but not as satisfying. (And not even close to window rattling??) This amp is set up in another room (smaller) and I stand closer – approx 6’ in front of the amp. (FWIW…the amp is the Blackstar HT5R mini-stack which, IMO, is just one of the sweetest home practice amps around.)

Interesting to know the range in which you work, Les. I always see that nice studio of yours and envy the distance you have from your cabs. I just can’t get that far away. If I were recording with my bigger amps, I’d have to put the cabs in a separate room like Tim Pierce. I’m really kind of the guy that these lower wattage amps are made for….but that is another thread.

Like I said before, if I were disciplined enough to hit the OSHA PEL at 105db/hr/day I’d be a much better player. (Wouldn’t OSHA love to know that’s how their data was being twisted around?!) Remarkably, after all the concerts, gun shots, airplane noise, construction sites, carpentry shops, band practices, nightclubs, and my ex-wife’s shouting my hearing still tests above the warning threshold at all but the highest frequencies. And I wasn’t very diligent about protecting my ears earlier in life. I’m more conscientious now but still ain’t no poster child for prevention of hearing loss I’m afraid. What?!

I use a room that's approximately 20'x15'. No carpet, all hardwood, old school horse hair and plaster walls. No furniture except a single lazy boy. Seems very loud at 85db. 100 year old windows I'd guess.

Plus side, no neighbors to speak of.

Literally knocking the plaster off the walls?! Now that's what I'm talkin about!

Turned my iPhone db meter on tonight when I played a little. Peaked at 96. Mostly high 80s, low 90s.

PRSAK said:
Literally knocking the plaster off the walls?! Now that's what I'm talkin about!
Click to expand...

I used this at work. We did mandatory OSHA training on hearing protection and decided to see our levels. Apparently, fire trucks range in dB from 90-105.

I'll have to measure it sometime. Usually I practice unplugged, but once I awhile I fire up the amp... and occasionally, not just the amp but also the entire studio sound system. It's effin loud

GJ is The Way