I know this was posted before in another thread. But, this is it... the final version and finally done!

A friend of mine and I were working on this mod project. The goal was to spec it out to my liking. The PRS S2 series is a guitar line wherein the body was made alongside their core series stateside but outfitted with overseas electronics and other hardware.

This was its stock form: 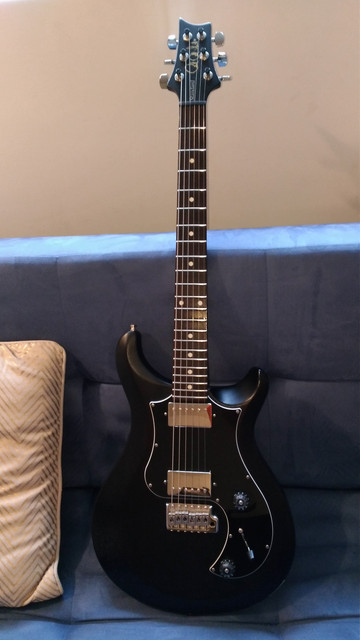 The Pure Tone jack has a different "feel" than a Switchcraft jack when putting the 1/4" cord plug into it. It has a very solid double "click" because of its design, as opposed to the normal single "click" of a Switchcraft jack.
The Schaller Megaswitch operates like a normal 3 way switch... rearward is the bridge p/u, middle position is both p/u's and frontwards is the neck pickup.

The tone control is normally out of the circuit. It is engaged when you pull the tone knob up. It is a 250k CTS pot with a .01uF CRL ceramic disc cap. It will give a clean tone, an overdriven "blues" tone, or a high gain tone. It will have the full potential of the p/u's output when the tone knob is "down" in its normal position, since the tone pot and cap are disengaged in that position.

The volume pot is a 1 meg . This will result in the most output the pickups are able to produce, short of wiring them directly to the jack! It also has a treble bleed circuit, with a 220k resistor and a .006uF cap wired in parallel.

It has PRS/Mann Vibrato Bridge in black nickel bridge, but I opted for the plain nickel saddles. The original Mann trem arm was also in black nickel but was too short for my liking. So, I used the original overseas trem arm in shiny chrome. I am still waiting for Roxanne at @John Mann 's to let me know if they can bend me a longer arm.

This is it! This should be the end of my GAS. Thank you so much to Dr.**** who patiently designed and built the electronics! 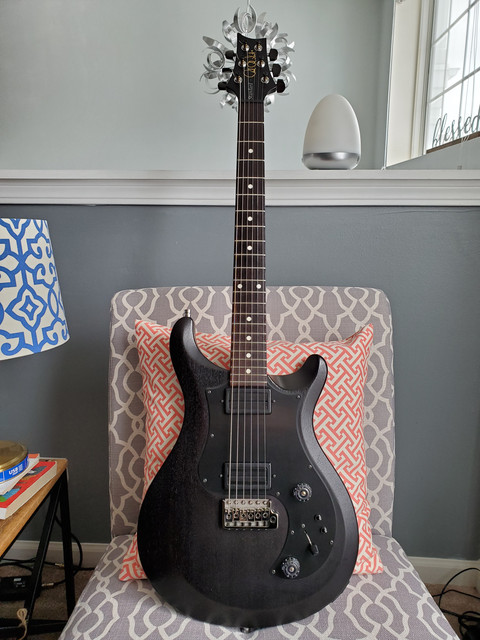 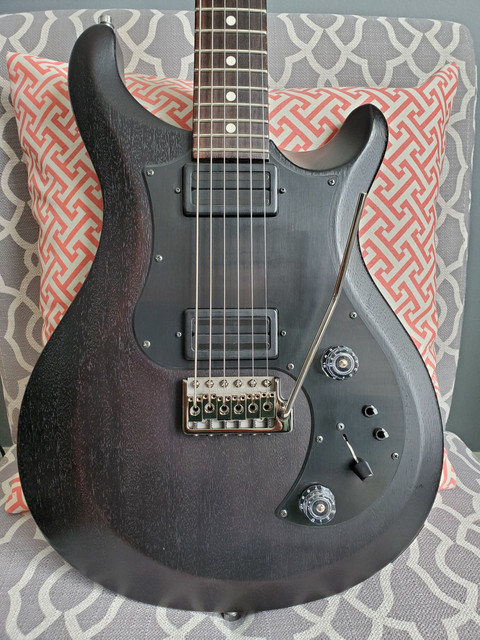 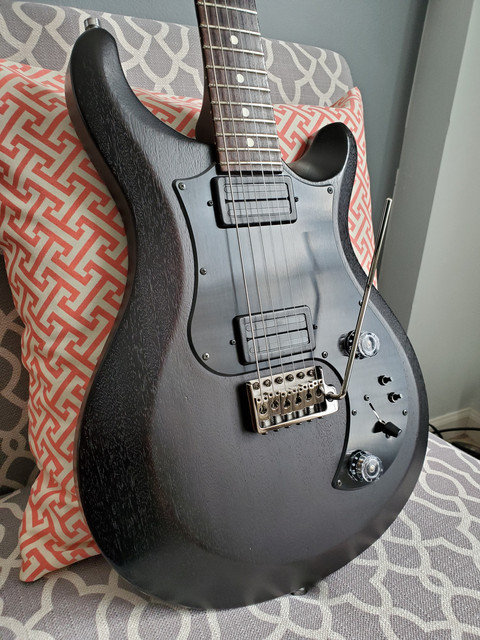 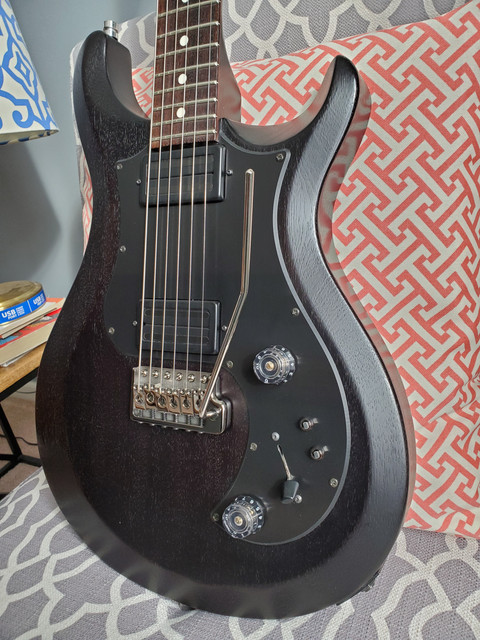 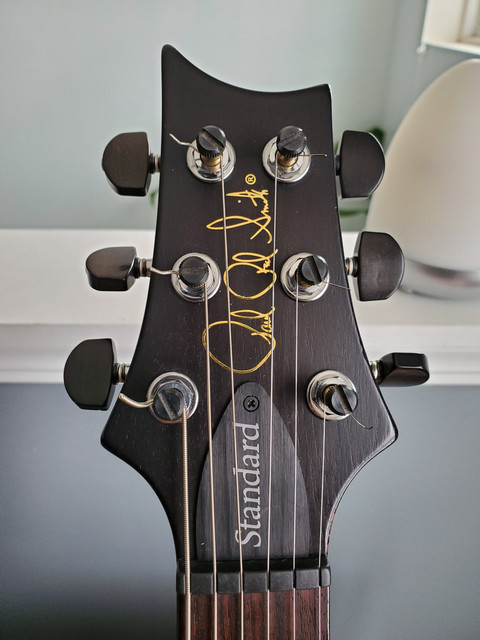 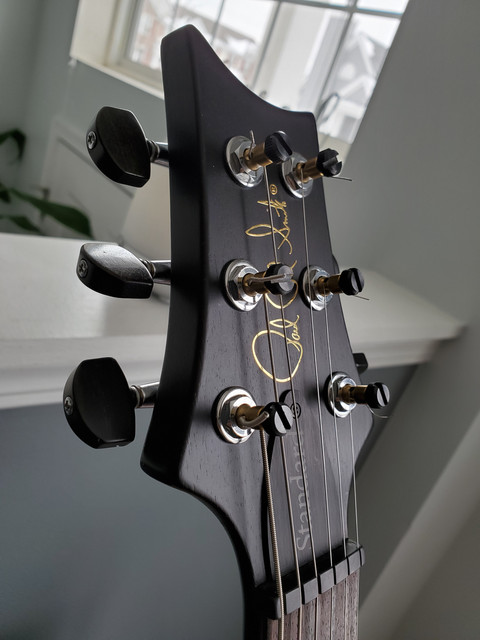 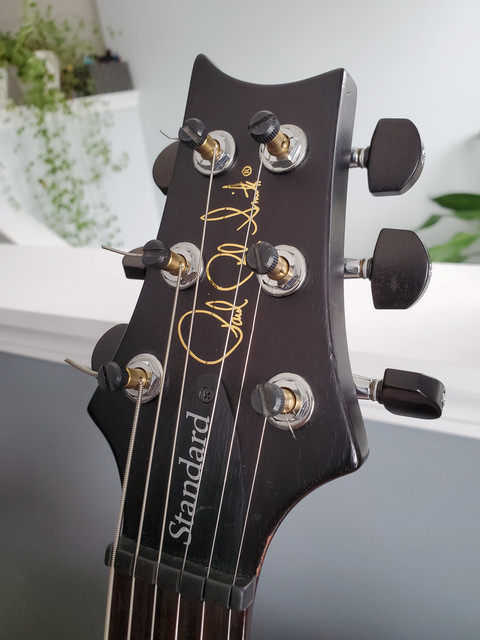 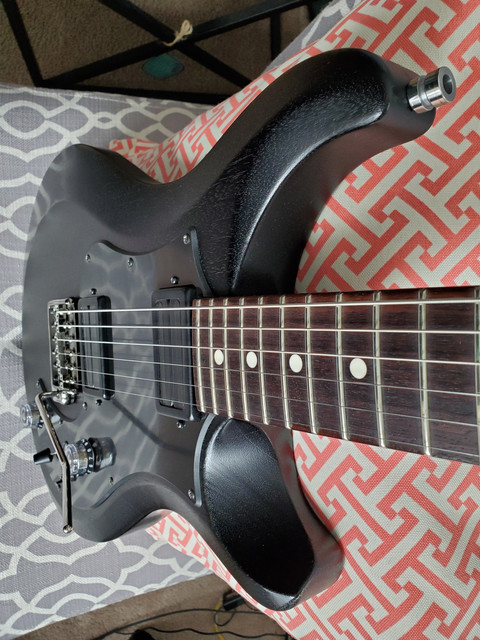 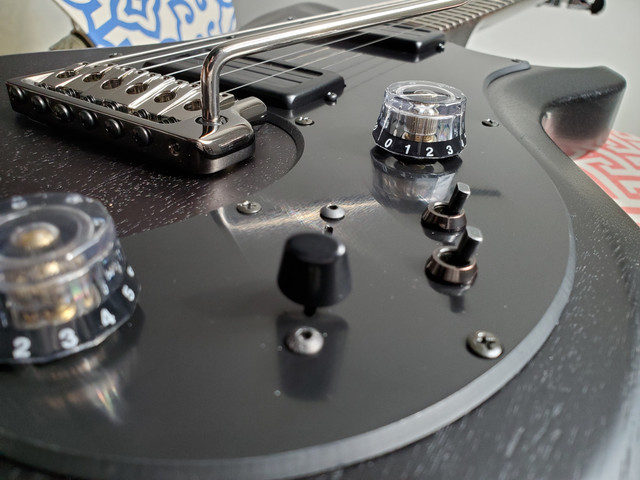 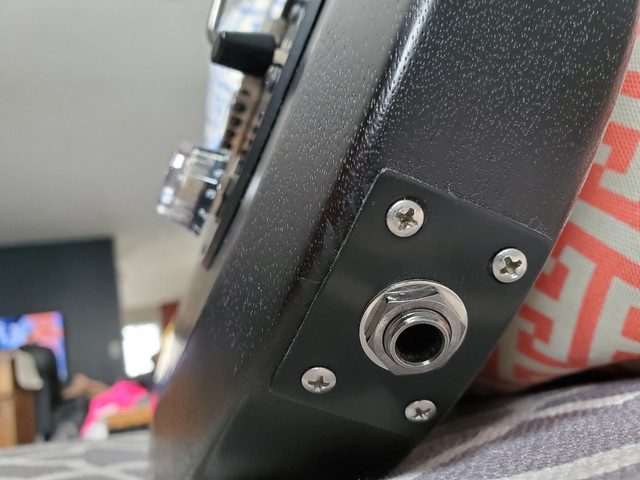 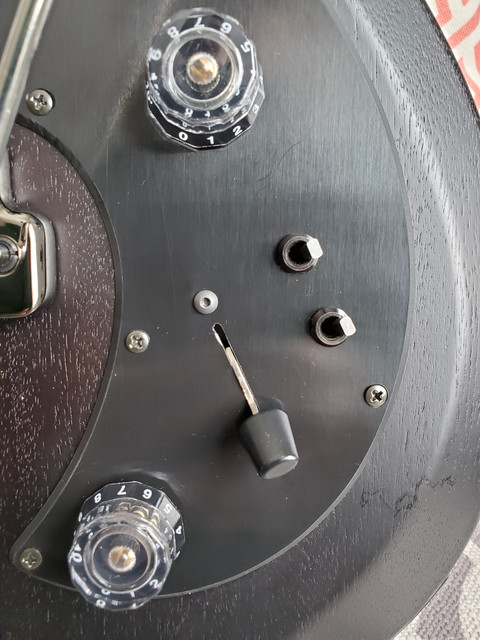 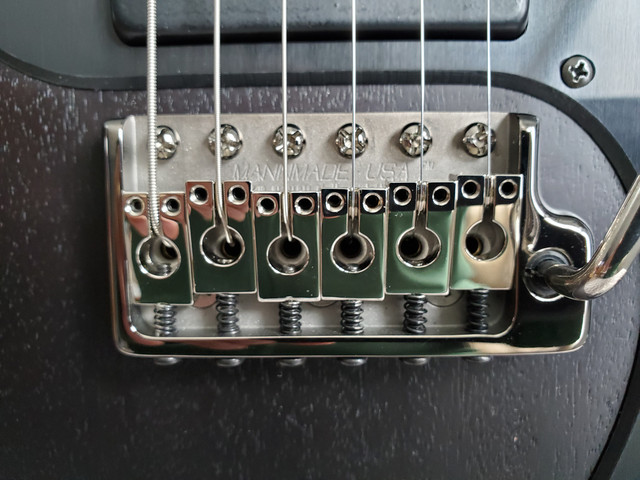 I installed only 3 springs for softer action and pronounced flutters and etc. 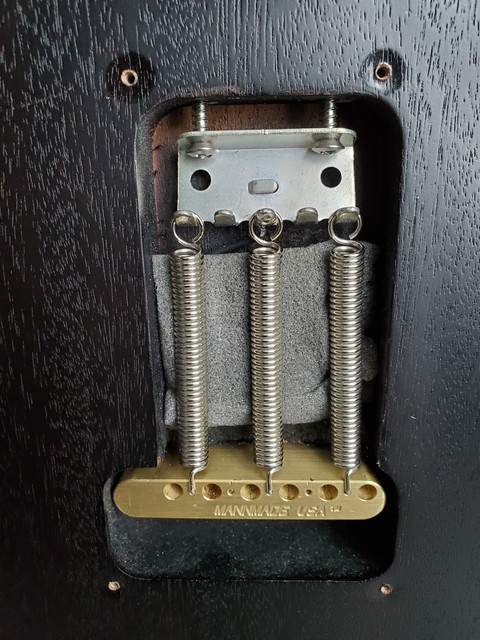 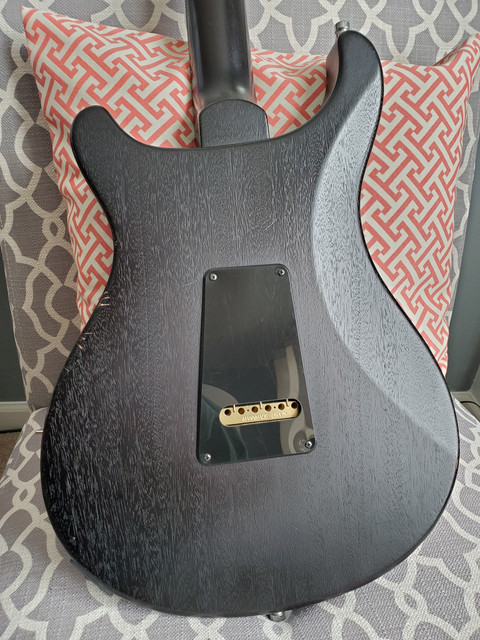 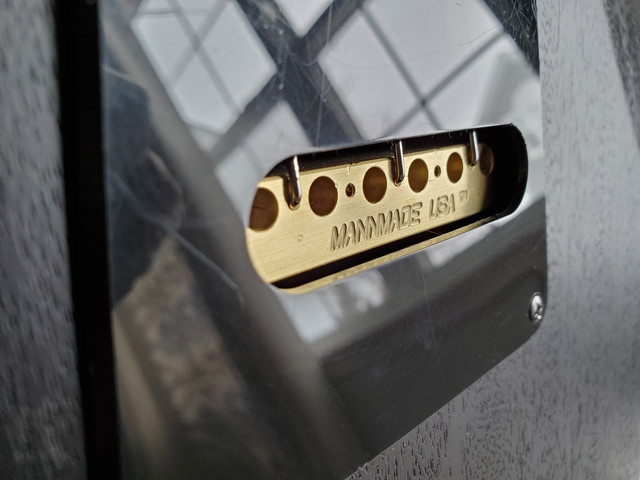 I got this guitar used. So, it has battle scars. I like guitars with a story than a brand new guitar. 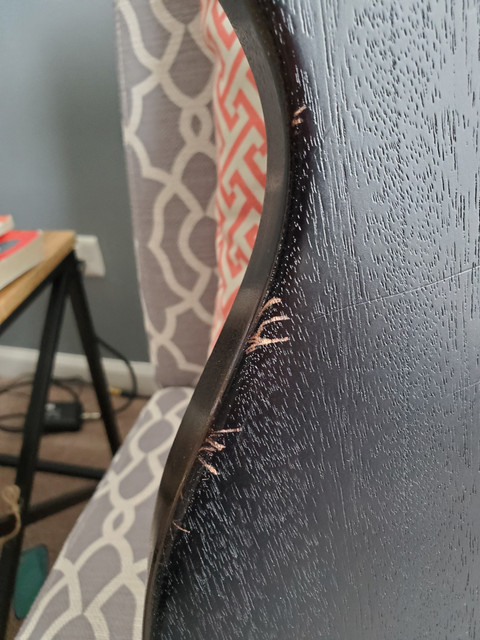 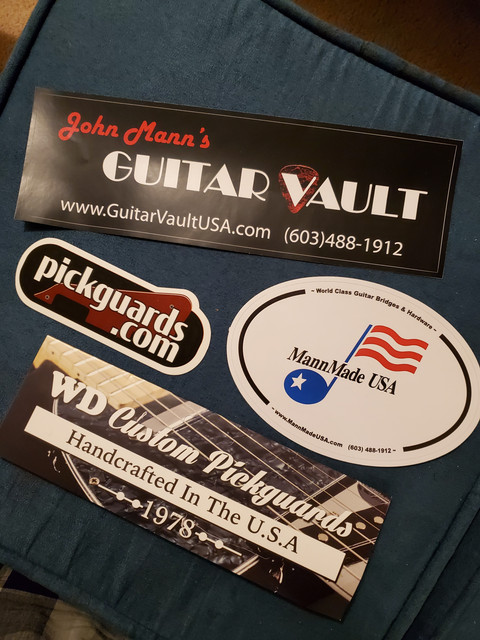 Congratulations on finishing. That is one badass hunk of wood.

Thank you @Alnus Rubra for the nick stage name!

What's next... been thinking if there's a better nut. And... I think I'm going to bevell that back trem string cover. It's starting to annoy me. Probably, a custom truss rod cover.

Then... a demo coming soon!

Hey thanks! I hella-love how it turned out too! The tone coming out of it is stellar! The circuit designer did great!
Last edited: Feb 16, 2020

We dance on the strings

Awesome! Looks and, I bet it sounds, great!

I just realized that I was not able to include a front pic of the Mann bridge. I added up in the first post.

Hey @littlebadboy when is your Kylo-Ten top arriving? Black burst finish with black/red uncovered HBs, red pickguard and clear/black lampshades. Red strings like the coloured ones that Howard Leese uses!

Killer setup! I love the appointments!

Since you made me think about a Kylo Ren guitar, I think I already have a prospect in my stable. It's not a PRSi though... it's an Ibanez RGIB6 baritone.

Small picture because it's not a PRSi... Perhaps just changing to a red knob should do it...

littlebadboy said:
Since you made me think about a Kylo Ren guitar, I think I already have a prospect in my stable. It's not a PRSi though... it's an Ibanez RGIB6 baritone.

Small picture because it's not a PRSi...

Perhaps just changing to a red knob should do it...

But in your heart you’ll know it’s not really a Kylo-Ten top!
J