After owning the ZM SE for 2 weeks .. Meh

So I bought the guitar 2 weeks ago, been playing it frequently, so here are my thoughts.

I am coming from a custom 22 and a MEQ so I knew there was going to be a big difference.

Cons
- Hate the pick ups, way to fuzzy and gets really messy when playing intricate parts (I am using a Bogner Uberschall, not some fuzz box).
- It needs to be tuned constantly, setup looks ok, using 10's .. Might take it in to get re-set
- Not a big fan of the sanded neck, but its usable
- It has no character
- The nut is to fat on the high E and digs into the side of my pointer finger

Overall - This is a $600 guitar for a reason, it feels like a lifeless guitar and the only thing going for it is its looks.
Regardless I am still keeping it. Maybe I might change the pickups but I don't know if its worth the investment.

Sorry to hear this.
I like the stock 245 pickups, and I have no tuning issues perhaps due to:
* Gotoh Vintage locking tuners
* EB Super Slinky Cobalts 9 - 42, and the nut is cut for 9s from the factory

The only time I have to tune it is during extreme temperature changes in my place.
It can go from 67° to 80+° in my place during the course of a week depending on the weather.
The strings will all be a little flat, or a little sharp, but if the temp stays around the same for a few days, the guitar stays perfectly in tune.

As Corey said, get your nut adjusted, they're cut for 9's stock so 10's bind and cause tuning problems. As for the pickups, I personally kind of liked the SE245's as well, but a set of 57/08's will clear things right up for you - most well defined pickups I've tried!

Nut is cut for 9's,every se except the clint Lowrey and baritones are setup using 9's. Nut sauce and possibly some locking tuners should do the trick.

The Bernie is cut for 10's too... That said, I still had binding issues on a couple of strings.

I sort of get what you say about the nut. Not that I was ever catching myself on it but I've never been a fan of the way the nuts are quite high with the deep slots. Not that it makes any difference to to anything if the slots are cut right but I like the nut to look smooth and rounded at the corners with shallow slots as seen in the pic of my Bernie below: 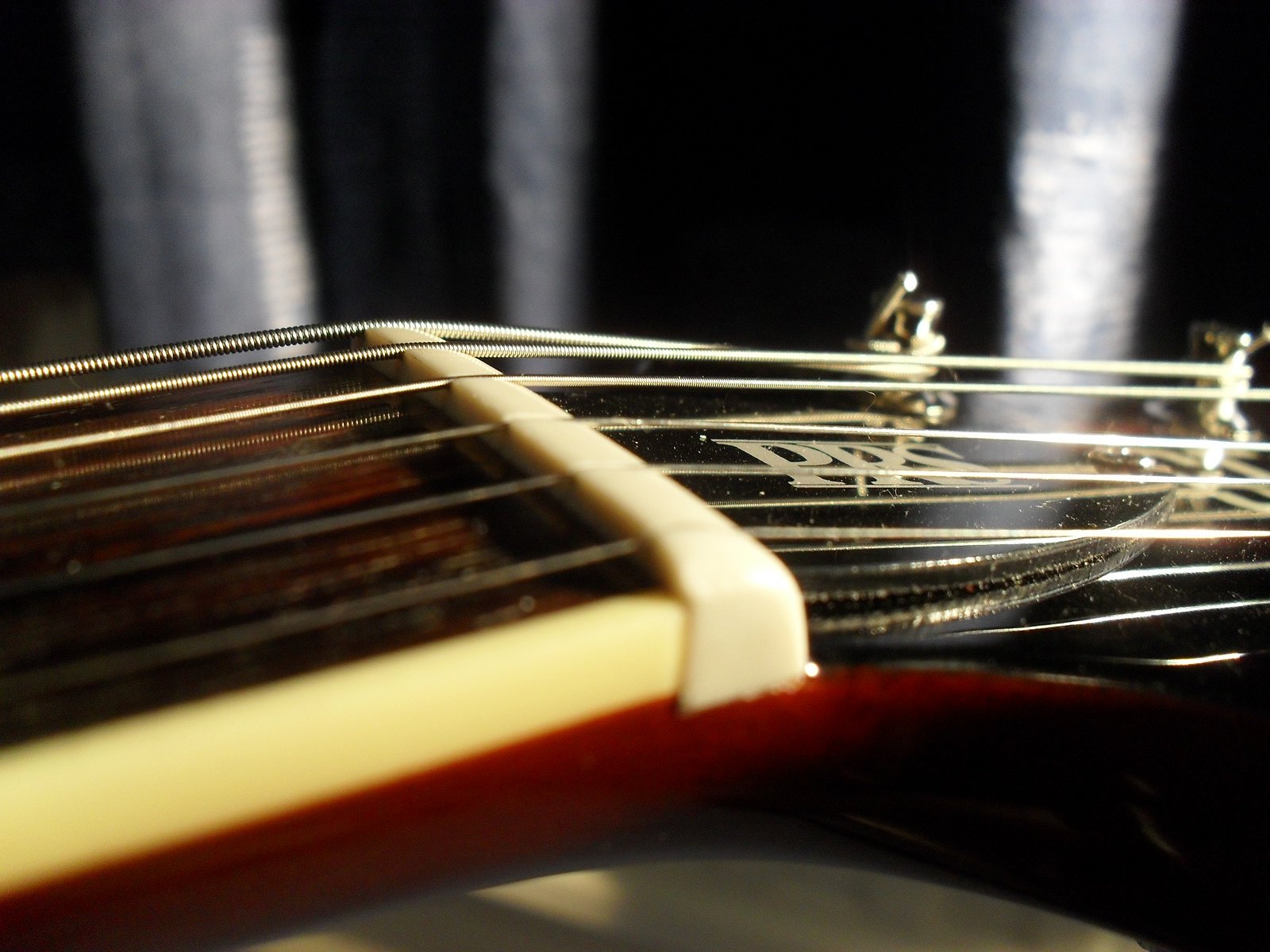 The original nut is shown here to the right: 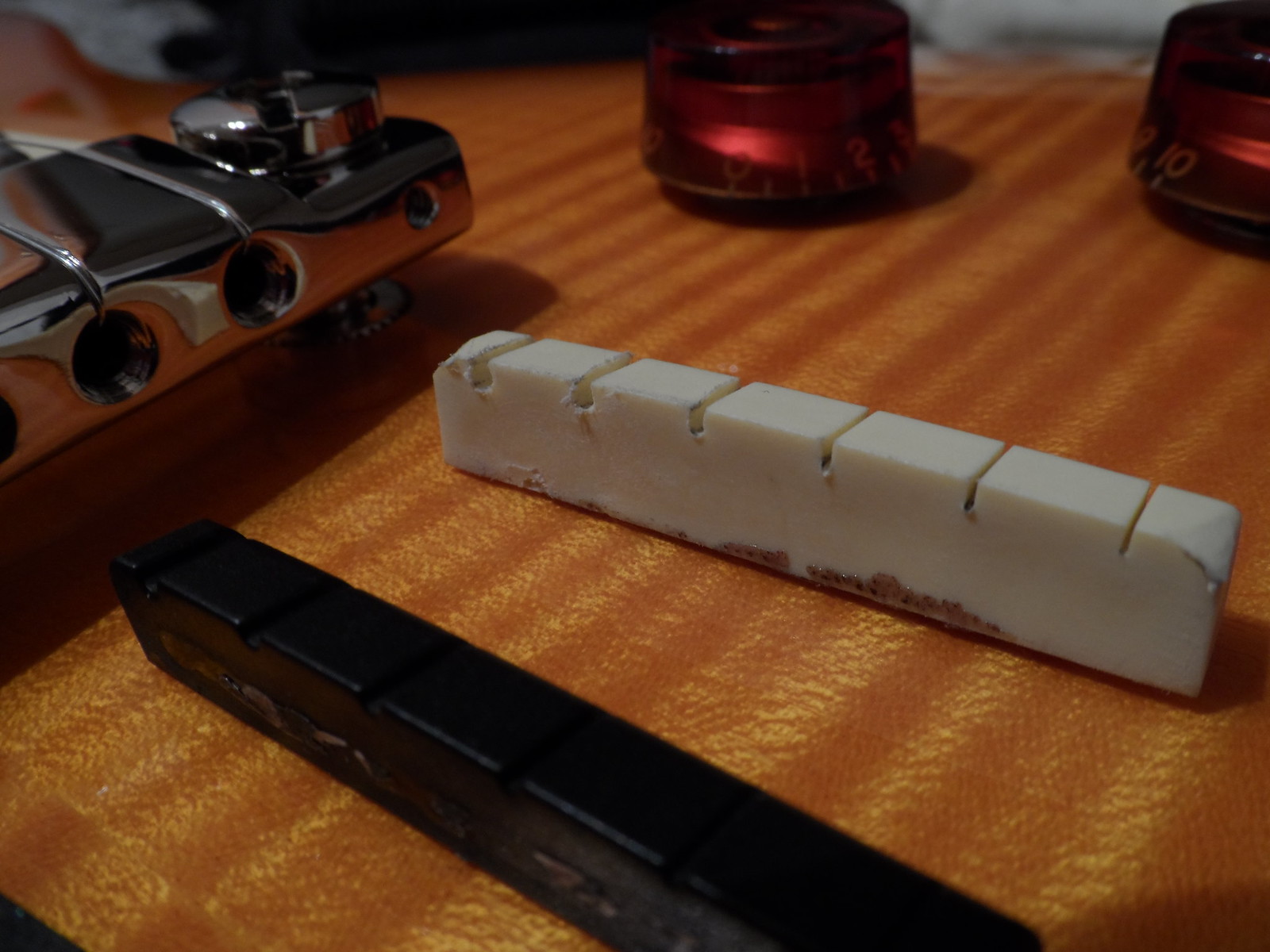 That's a Tusq nut in black to the left. Check the difference between the slots. The SE Nuts can sometimes be a weak link which I've always found puzzling considering how cheap they are (the nuts) and yet how good the quality of the rest of the guitar is!. Still, plenty of others have received theirs with no issues so it seems the QC on the nuts is hit and miss.

I do disagree with the no character thing though... It'll have character. Just not what you're after.

I quite liked the SE 245 pups, the neck in particular I thought was sweet sounding. That said, I did invest in some high quality replacements and that did give me exactly what I was looking for. Did it give the guitar more character? I think so in as much as it seemed to open it up a bit more. But the 245 pups are by far the best sounding pups I've heard on a mid priced guitar or import (That isn't using big brand names such as Seymour Duncan, etc).

May be worth trying some aftermarket pups out if you like the rest of the guitar. I'd definitely have your slots widened by a tech or even a change to a Tusq nut that can be cut and shaped how you like it.
Last edited: May 18, 2014

It might be time to move on.... Selling now may be a good idea while people are still waiting on these.

sergiodeblanc said:
It might be time to move on.... Selling now may be a good idea while people are still waiting on these.
Click to expand...

Yeah, kind of a long list of dislikes although most can be fixed or changed. The neck will gloss up some after putting a bunch of playing time on it. The nut should be cut properly for whatever string gauge you choose. One would think one gauge higher should not require any change, but it's just not always true. It might be able to be shaped and sanded a bit to prevent the digging in issue. The Uber is obviously very high gain. I need to lower my pickups some from factory setup usually for really high gain. Could try raising the pole pieces for more clarity too. Or change pickups all together.

I wasn't a fan of the pickups either but I also had a definitive plan on what I wanted to change before I bought it. Not something I'd consider on a more expensive guitar. Other than the feel of the neck, your dislikes can be easily changed if you decide to keep it. Just a thought.

What the gravy and cheese!!!!

my two cents. Not all guitars are going to be for all guitar players. I for one liked it stock. But, I know I would not love it. I was nicely surprised by the stock pickups. I am loving my 57 classic and classic plus pickups in it. I am loving the ghost piezo system I put in it. The neck work for me!!!! It now fills a void for me. IT is my beater, and that word is subjective to the player. For me, beater is the one I take everywhere, it must be versatile and I must not be concerned if it get damaged, stolen. The ZM does it all with my upgrades and it looks awesome. --ok i would be a little upset if it got stolen:box:

Again, this guitar works for what I need it to do. if it did not, I would get rid of it and find the one that does. ( I was hoping a CE would be that guitar until the semi hollow came along).
S

I know some of you have mentioned to return it however it's too good looking of a guitar to just throw away.
I can always keep it as a backup guitar, however none of my guitars have failed me on stage *knock on wood* .. or whenever I have kids, if they are interested in guitars I can give them that one.

Great looking guitar? Check
General QC ok? Check
Tuners working properly? Nope. Installed a set of Elixer 9's and my Snark lives on the headstock. Replaced tuners with aftermarket locking tuners and problem solved.
Pickups ok? Yeah, just barely, but I don't do just barely. Installed a set of Dimarzio 36th anniversary PAF's just to try something different and in keeping with the value theme of a $600 guitar and problem solved. I'm impressed with these value pups.

So changing the tuners and pups cost me an additional $200 but still a PRS under a grand is a steal.
S

Which locking tuners was everyone here replacing the stock ones with? Any mods needed?

I am running the Gotoh Vintage lockers which are a drop in with absolutely no modding needed to the guitar.
TK-0735-001 Locking Tuners Vintage 3x3 Nickel
http://www.allparts.com/TK-0735-001-Locking-Tuners-Vintage-3x3-Nickel_p_3635.html

They are harder to turn than the Planet Waves AutoTrim tuners (modding needed) I have on all of my other guitars though, but they look like the stock ones with the green tint.

I've never played one of those new ZM models, but I've owned a few SE's and played many and to me, they are great guitars for the buck, but I've never found one that I was comfortable with the pick ups, tuners & nuts set. So, to me, is, if I am getting an SE, It will goes to have those upgrades.
T

Just wanted to jump in here as I'm about a month in with my Zach. I also had tuning issues when I first got mine, couldn't keep it in tune to save my life. Had a bone nut installed, no tuning issues whatsoever. Had the pickup height adjusted, that also made a difference (although I still may go with Dimarzio 36th Ann's). Had a pro do the set up......all in all, transformed the guitar!! Play it every day.....
T